The Hotflush boss takes a turn for the most cavernous of clubs on album three.

Any album that starts with a monologue decrying a lack of individuality in modern music could justifiably be accused of setting itself up for a fall. The music contained within Hotflush boss Scuba's third album largely manages to transcend its grumpy opening, though it's an oddly downbeat way to begin. It's doubly amusing (perhaps intentionally so) when, after its confrontational first few seconds, it becomes evident that Personality is Paul Rose's least moody record to date. Where his debut and its follow-up, 2010's largely excellent Triangulation, were rendered in stark greyscale, here he lets in sumptuous bursts of melody that light up the darkness around them in sharp relief.

Thankfully, though, they're rarely bright enough to obscure the more appealing aspects of Rose's music. Having started out making dubstep at a time when the term still meant deep, bruising music for brain and body, he’s always been most interesting at his most subtle. So even as Personality focuses on big-room, big-crowd dynamics more than any of his previous works, its finest moments arrive when Rose drops his guard and allows things to unfold at their own pace. Action begins life as dub-techno, pillowy chords anchored fast by huge, booming kick drums; halfway through, a slight shift in energy morphs the track into hefty, robotic electro-funk. Dissonance revisits the pared-back Autonomic style of drum'n'bass he first began exploring with 2009’s Aesaunic EP, drenching a metallic jungle break in lovely, languid synth drones.

Elsewhere, Personality finds Scuba's music finally shifting into a region hinted at for some time: cavernous club music. It sometimes lacks the focus of his straight-up techno material (released as SCB), and his direct melding of UK and European structures occasionally produces rhythms leaning uncomfortably towards straight-up breakbeat. First single The Hope is one such offender, and its smutty spoken-word mantra is a little unsettling; but tracks like July and If U Want represent some of his sharpest club music to date. In contrast to the claustrophobic pressure of early Scuba, the expansive nature of many of Personality’s tracks could easily risk sounding overblown in smaller clubs – but perhaps that's an inevitable side effect of his DJing in larger venues these days. Still, as a standalone listen this is an interesting development of the stylistic restlessness that's driven Rose's progress so far. 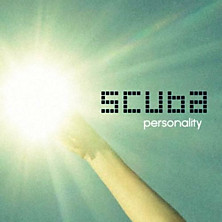