It would be a little disengenuous, when talking of Will Oldham, to say his latest album takes an unexpected turn. His entire career has consisted of a series of bogus identities adopted to confound any expectations about his next direction. Nevertheless, if someone had suggested that, after last year's marvellous Master And Everyone he would re-record a bunch of songs from his Palace period with some crack Nashville cats you'd probably have been right to scoff. But he has, and the results are somewhat confusing.

One aspect of Oldham's appeal was always his stoically lo-fi stance. Albums filled with his old-time biblical analogies and secular obsessions have been recorded in bedrooms and kitchens with barely a nod to modern recording techniques. Here we get that stuff smothered in the cream of Nashville players such as Hargus 'Pig' Robbins (legendary keyboard player on everything from George Jones' ''White Lightning'' to Dylan's Blonde On Blonde) and violinist Stuart Duncan. Had Will's faltering larynx been removed from the mix this could be mistaken for some mainstream countrypolitan release from the early 70s. However there's no escaping Oldham's darker viewpoint and Greatest Palace Music is unavoidably a deeply schizophrenic album.

This doesn't mean that it's any kind of failure. It just becomes harder to engage with when you suspect that some kind of wry self-parody could be happening before your ears, but you're not quite sure why. The strident pedal steel and Robbins' jaunty piano work urge Oldham's songs into a bizarrely jolly place. Listen to the singalong of ''I Am A Cinematographer'' or his duck impersonation on ''I Send My Love to You''! Even the garish cover (all tropical fauvism) screams 'happy' at you. However on his gloomier tracks the band easily matches the mood, resulting in some genuinely affecting moments. ''Agnes Queen Of Sorrows'' and ''Riding'' are gorgeously maudlin folk gems that stand with his greatest work while ''West Palm Beach'' uses the soft backing to lift its lovely melodic chorus to new heights.

Ultimately though, this is an album that is musically so easy on the ear as to be strangely easy to ignore. One longs for less to distract you from his unique world-view and wonderfully idiosyncratic voice. As a detour it's mighty fine, but as Neil Young famously did after the mellow Harvest, you cant wait for him to grow tired of the middle of the road and head back towards the ditch... 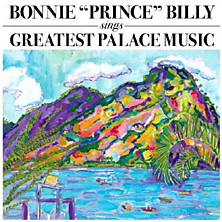