Serious question: is anyone left in the known cosmos who hasn’t already heard these songs? Is it possible to think of Darth Vader after a hard day at the office blowing up planets without imagining him retiring to his chamber afterwards to put his feet up with a nice glass of chardonnay and Somebody to Love on the stereo? Can one really picture Spock and Kirk in the holodeck, playing a game of squash without their preferred soundtrack, You’re My Best Friend?

Apparently there are people still on this very planet, Earth, who have never been exposed to the rock and roll majesty of Queen and their iconic Greatest Hits albums. And while there are tapir-hunting tribesmen in Borneo who haven’t heard the ‘politically of its day’ harmonised rock of Fat Bottomed Girls, and goat-milking crofters on the Isle of Arran who are unaware of the priapic, steroid-pumped funk rock of Another One Bites the Dust, it is EMI’s right – nay, their duty – to keep on reissuing these essential rock artefacts.

Only a fool would try and find fault with these discs. While they don’t necessarily contain all of Queen’s finest tracks (Sheer Heart Attack from News of the World, for example) or even all their best singles (It’s Late, for another example), they certainly are the mightiest statements the four-piece ever recorded. These are essential compilations that any coach driver, jukebox filler or wedding DJ worth their salt will have as the bedrock of their collection.

The first volume (pictured, tracklisting to the left) is one of the most successful albums of all time, having shifted 25 million copies and covers the first stage of their career, spanning Seven Seas of Rye (1974) to Flash (1980). In amongst the songs that even your grandma knows (Bohemian Rhapsody, We Will Rock You, Don’t Stop Me Now) are a few gems that show exactly how weird Queen were for a mainstream rock group, such as the futuristic howling pomp-rock of Now I’m Here.

While, perhaps unavoidably, the second disc isn’t quite as stunningly impressive, it still charts the second half of their career well (from doldrums to Live Aid to impressive second act to Freddie Mercury’s sad decline) and sold a not unenviable 16 million copies. And even though the melancholia present in their later singles (The Show Must Go On, Innuendo) isn’t something a fan always wants to dwell on, this is also where to find some of their finest moments (Hammer To Fall, I Want To Break Free, Under Pressure). Buy a couple of copies for those isolated Inuit herdsmen in your life. 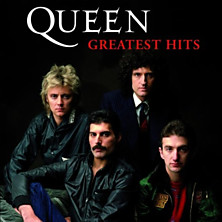