An enjoyable seventh album from one of the emo originals.

Jimmy Eat World are pioneers of emo – that melodious, sentimental brand of American indie rock that has swept the globe in the past decade. You may well resent them for it. Certainly emo has become a tainted word, conjuring up images of over-emotional teens who wear too much black eyeliner.

Yes, Jimmy Eat World have always been sentimental: they tug on the heart strings with yearning melodies that pound you into snivelling submission. But, crucially, they also know how to rock out. Their breakout albums Clarity and Bleed American made you reach for the tissues one minute and then jump with fist-pumping joy the next. For kids who care about credibility, that’s a key distinction.

With success came cash, though; cash that has been used in the studio to smooth out the rough edges. Listening to Jimmy Eat World has always been easy, but in recent years it’s got a little too easy. Nothing has blown the ears back, even if the choruses have still, technically, been strong.

For Invented, then, it’s exciting to hear that Mark Trombino, who produced Jimmy’s breakthrough discs, is back at the helm – even if that news is tempered by the process: the band recorded tracks in their studio in Arizona and then emailed them to Trombino in California. Trombino has done his best here to reinvigorate the Jimmy Eat World sound and put a bit of the heaviness back. On My Best Theory (the lead single) and Action Needs an Audience, he’s made the throbbing riffs fresh and aggressive again.

Trombino has also brought back the sparkle to songs that could have died on their backsides: the acoustic guitars on opener Heart Is Hard to Find sound crisp and vital; Coffee and Cigarettes’ plain melody is driven forward by bringing the bass up high in the mix; and, best of all, Evidence broods menacingly before exploding into a glorious burst of distortion.

Doubts creep in during the quieter moments. Cut, Invented and Mixtape all work fine – they all have blissful harmonies and delicate choruses – but they represent nothing new. They are over-familiar Jimmy Eat World formulae rehashed. They are songs that look backwards, not forwards.

Seven albums in, Jimmy Eat World are still going strong, and Invented is an enjoyable record. But it also fails to dispel the concern that the band’s well of ideas is about to run dry. 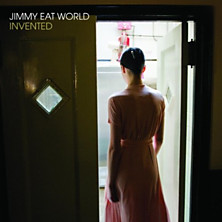