What an odd album this is.


Picture if you will a group of intoxicated folk musicians let loose in a studio filled with antiquated synthesisers and random percussion instruments and you may muster some idea of what Las Malas Amistades sound like. The fact that the group, hailing as they do from Colombia, sing entirely in Spanish makes the whole exercise even more impenetrable to the monolingual Anglo-Saxon ear.


Formed in Bogota back in 1994, this collective of former art and film students combine a disparate range of influences, from Serge Gainsbourg and Captain Beefheart to the traditional music of their homeland, to create a unique sound that is as beguiling as it is frustrating.


Patio Bonito, their third full-length release, is a spontaneous, lo-fi batch of short, scratchy songs (19 in all over 40 minutes) that often seem to be over before they have really begun. The album lurches haphazardly from track to track across a bewildering array of styles and tempos, revealing tantalising, spidery snatches of melody that crawl infectiously over the listener before disappearing just as quickly as they arrived.


Rather like the maverick Scottish songwriter Lone Pigeon, Las Malas Amistades seem to have a plethora of ideas but an infuriating lack of focus. They are at their best when acoustic and relatively uncluttered, for example on '‘U’' and ''Museo De Los Imperfectos'’, allowing their simple, sinuous sensuality to really shine through.


Overall however, one cannot help but think that this enjoyably eccentric trip could have been even better had the band opted to write some longer, more structured songs, concentrating on their strengths while retaining the whimsical sense of fun that makes this record greater than the sum of its parts. 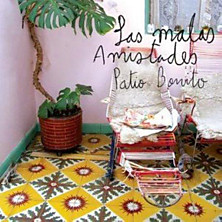