Memory Tapes’ Seek Magic was an excellent debut album. There was rave abetted by a bicycle pump (on, yes, Bicycle); drowsily amorous funk on Green Knight; and the calming chillwave ebb and flow of Run Out. Listeners could even forgive the fact that the man behind it, Dayve Hawk, spells his forename with a superfluous "y". His second album, Player Piano, suffers from an appalling punning title but does contain a few terrific songs, even if it can’t quite compare with Hawke’s first effort.

Three absolutely outstanding tracks overshadow the rest. Wait in the Dark is a perfect, simple psychedelic nursery rhyme, half Empire of the Sun, half Craft Spells. It’s full of terrific elliptical lyrics like, "This is it, don’t make me wait / Save it up for tomorrow and say it’s too late." Today Is Our Life is much the same, albeit with a seemingly incongruous (but great) guitar solo and a contemplative-but-arms-aloft synth outro. Sunhits continues the less-is-more manifesto and has all the necessary beats and chiming riffs of an instant summer classic. Collectively, the three songs sound as beautiful as the revelation that a secret love is elatedly requited.

Meanwhile, the rest of the album is only decent. Amid martial drumming Yes I Know hints at Kate Bush and Joy Division, but lands at Bat for Lashes and Interpol. Offers is a sleaze-free alt-Chromeo with snake-charming melodies and an air of mystery. The intriguing Worries sounds like Yeasayer mugging Vampire Weekend for their African beats and the regency air of The Kids Don’t Stand a Chance; while Fell Thru Ice has the glacial (sorry) feel of Silent Alarm-era Bloc Party.

Aside from the best three tunes, then, Player Piano is a musical jacket potato: satisfying but never amazing. For a more consistently excellent 2011 album of simple, affecting US alt-fare, check out Love Inks’ E.S.P. or the aforementioned Craft Spells. 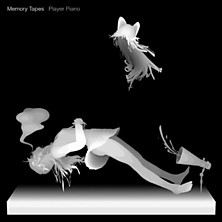