A kaleidoscopic, breathless run through the genres and eras that have inspired her.

Janelle Monáe has long been the toast of certain figures in the music industry. Her 2007 EP The Metropolis Suite bagged the Kansas-born singer a Grammy nomination, while Big Boi and Sean ‘P Diddy’ Combs are vocal fans; the former inviting her to guest on his albums and the latter declaring her “one of the most important signings of my career.” Her stop by The David Letterman Show (watch on YouTube) was perhaps the single most exhilarating breakout performance in recent history, and guests on her debut album include said member of OutKast, hip-hop poet Saul Williams and even indie wunderkinds of Montreal. The result is a dizzying fusion, marked by its lofty ambition and stunning central performance.

The ArchAndroid continues the saga Monáe originated on her Fritz Lang-influenced previous release, wherein her alter-ego Cindy Mayweather comes to terms with her messianic status as the ‘ArchAndroid’ of the record’s title. Set in a far-flung dystopian future and talked up by its creator as less an album, more an “emotion picture”, it certainly comes off a little… highfaluting, at first blush. Yet the kind of hubris Monáe exemplifies (“this album is for the people,” she notes) is inseparable from her work; what’s more, it is pretty much justified. Suppression may be the key theme explored, but the whole affair is so stylistically diverse and outright enjoyable that any notions of posturing quickly become redundant.

Monáe and her Wondaland collective span styles and epochs seamlessly over these 18 tracks, touching on everything from fantasia strings to psychedelic trad-folk, cabaret jazz to traditional R’n’B… heck, even goth and Eurotrance get a look in, on the shtick-y Come Alive and megawatt Cold War, respectively. In hands any less talented than these the outcome might prove interesting, but here it is positively intoxicating; Monáe is just as comfortable throwing diva-like shapes over BaBopByeYa as she is trading lines with Kevin Barnes in Make the Bus or channelling James Brown on the irresistible Tightrope.

Across the breadth of the record songs and icons are recalled and reinvented, flickering like ghosts you recognise but can’t quite place; Monáe's skill is to fashion them into something bordering indefinable. She is an easy, natural star, and The ArchAndroid is a kaleidoscopic, breathless run through the genres and eras that have inspired her. 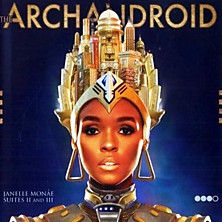