A stunning debut that gives up more secrets with every listen.

As Vex’d, Jamie Teasdale and Roly Porter helped lay the dubstep blueprint that so many now follow through tracks like the dirt-smeared Angel. Yet the duo’s 2010 long-player, Cloud Seed, showed there was a much greater breadth and depth to their sound. Not for them the genre-bound paralysis that has beset some producers following dubstep’s crossover to the mainstream.

So perhaps it should come as no surprise that Teasdale’s debut solo album has only the slightest rhythmical hint of dubstep running through it but, in comparison to his work with Porter, Severant still marks a huge creative departure. The gentle analogue warmth of opener, Visioning Shared Tomorrows, has a lightness and melancholic weight to it that’s more in line with straight melodic electronica and the synthesised bass and skittering snares of Ant City reaffirm that Teasdale won’t be unleashing any window-shaking bass-bombs. Indeed, Severant’s stall is very much set out in line with the classic electronic music of the 70s and 80s, but with the added influences of early electro and so-called ‘intelligent’ dance music.

If tracks such as Ant City and the yearning slow-burn of Seeing the Edges offer a respectful nod to Vangelis through their soaring synths and emotion-drenched strings, Flight Path pays direct homage to the Greek pioneer’s Blade Runner soundtrack. It lifts the bassline from the 1982 film’s end titles and thrusts it into new, more expansive and less doom-laden territory.

The album is not merely made up of sonic sci-fi references though. Moments such as the all-too-short drift of Shutter Light Girl echo Warp Records’ mid-90s Artificial Intelligence series, while Scissors combines a chopping bassline with a hook that bears more than a passing resemblance to Carly Simon’s Why and the mellow, dubstep-paced Memory Rain matches reverb-soaked vocals with drowsily sunny keys.

With a wealth of feeling and shimmering soul running throughout, Kuedo’s music cannot be pigeonholed as mere intelligent dance music; it’s more emotionally intelligent dance music. While it won’t please those expecting a selection of aggressive dubstep workouts, Severant is a stunning debut that gives up more secrets with every listen. 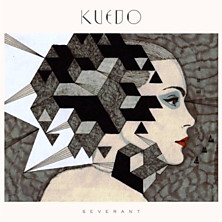