Professor Green At Your Inconvenience Review

A depressingly compromised second LP from an artist yet to meet his early promise.

You have to feel sorry for British hip hop. For 20 years it was the runt of pop’s litter, ignored by the mainstream and considered too inauthentic by fans of American rap. Then Dizzee Rascal has a number one and the singles chart and British teen culture becomes entirely dominated by pop-friendly London MCs… at the exact point when everybody stops actually buying music.

This perhaps explains records like this second album from Hackney’s Stephen Manderson aka Professor Green. After winning an avalanche of freestyle rap battles and surviving a false start with Mike Skinner’s ill-fated The Beats label, 27-year-old Green struck pop-rap gold in 2010 with his Alive Till I’m Dead album and the Lily Allen-bolstered Just Be Good to Green single. There have also been tragedies and traumas – the suicide of his father, a friend’s death by heroin, a 2010 attack with a bottle at Cargo in Shoreditch that saw his assailant sentenced to jail time.

So, when he asks rhetorically, on the opening title-track of the follow-up: "Why would I make dance music / When I can’t dance to it?" before declaring, "I’m the antidote to that s***", and you’re nodding along approvingly to the low-slung, squelchy G-funk adorned with fuzz guitar and rude bursts of synth, you want to take the man at his word. Then you notice the presence of a bland drum‘n’bass track (Trouble), a dodgy trance-meets-breakbeat tune (Remedy) and the now-obligatory Dubstep One (How Many Moons). And you are, frankly, bemused and, increasingly, very, very bored.

Of course, one person’s ‘eclecticism’ is inevitably another person’s ‘throwing any currently marketable material at the wall to see if it sticks’. At Your Inconvenience is dominated not by club bangers but incredibly maudlin rap ballads full of banal piano lines, anonymously cutesy-pie female vocalists and choruses that scream, "Please let me on The X Factor… I promise I won’t swear!" The award for most soul-sucking moment becomes an arm-wrestle between Spinning Out, which thinks it ‘samples’ Where Is My Mind? by Pixies but actually covers it in cruise-ship style and then chucks a pointless rap at it, and the closing Into the Ground, which attempts to reclaim Green’s hip hop cred by unleashing a barrage of witless misogynist abuse. Green apparently sees no hypocrisy in including this track after the dire schmaltz that is Astronaut, a song about a rape victim who becomes a junkie and commits suicide.

Add the inevitable ‘it’s awful being famous’ whinge-rants towards the album’s end and the inconvenient truth is apparent: this is a depressingly compromised album from a rapper who, around the time of his 2006 ‘mixtape’ set Lecture 1, looked set to live up to his billing as the UK’s answer to Eminem. Instead, Professor Green seems to have settled for being the musical version of Lee Nelson’s Well Good Show. Without the laughs or the fat bloke. 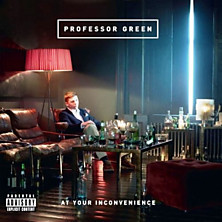