Packed with remarkable insights that will entrance connoisseurs of the Études.

"I’ve invested a lot of passion and faith in the future of the Études. I hope you’ll like them, both for the music they contain and for what they denote." Written by Debussy to his publisher, these words serve as a timeless note for all pianists and listeners. Composed in 1915, three years before his death, the 12 short pieces contain some of Debussy’s most adventurous and exploratory piano music, but they are also the distillation of a lifetime’s achievement in the medium – in effect, as Roger Nichols puts it, "his final testament to piano literature".

Only recently have the Études begun to be valued as the gems that they are. Although teeming with delights, it is probable that the surface-level academic nature of these "studies" (dedicated to Chopin, a previous master in making mesmerising music out of ostensible exercises) was a factor in their neglect. Another may have been their huge technical demands (Debussy himself admitted struggling to play some passages) – but this is certainly not a problem for Pascal Rogé, who gives fluent and often dazzling performances on this new Onyx release, the fourth volume of the complete Debussy piano music.

An acclaimed specialist in this repertoire, this is Rogé’s second recorded Debussy traversal, following his 1970s and 80s Decca series. If there is more sense of consideration in these new readings, which can sometimes lack spontaneity, there is also greater depth and authority. Unlike some pianists, Rogé’s Debussy is rarely soft-grained or sepia-tinted; every note counts and is clearly enunciated. This may occasionally come across as over-deliberate, but the music frequently benefits from clarity, and there is no shortage of nuance or character.

In Prelude No.1, which pays playful homage to Czerny, Rogé scampers up and down the keys brilliantly; the immaculate rapid runs of the short-and-sweet No.6 are even more breathtaking. No.8 is wonderfully delicate and wistful, but still purposefully driven; the tranquil, shimmering No.10 is atmospherically charged; and No.11 engagingly contrasts lively animation with dreamily floating charm.

Such is the richness and diversity of these pieces that there can be no "last word" in performance. Jean-Yves Thibaudet on Decca offers an excellent alternative, more suave and vibrant than Rogé, but this release is packed with remarkable insights that will entrance connoisseurs of the Études and win them many new admirers. 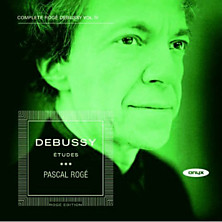