An entertaining listen, as changeable and dynamic as any of the composer's best work.

Sir Simon Rattle has a long and well-documented history with Mahler's symphonies and especially the ‘Resurrection’, having recorded it previously with the City of Birmingham Symphony Orchestra. It's tempting to go back and listen to that original recording to establish whether or not any wild, youthful quirks or hoary comforts have snuck into either that one or this brand new one, but ultimately such comparison doesn't reveal exactly how well Rattle and his Rabble handle the work. In many ways the symphony itself is as turbulent and changeable as Rattle's time at the helm of the legendary Berlin Symphony, which makes for an entertaining listen, as changeable and dynamic as any of the composer's best work.

Spreading the work over two discs is perhaps inevitable, but splitting after the very first movement is actually rather canny – Mahler specified that there be a five-minute gap after the movement for the audience to settle down in. Listening to this live performance of the first movement, the audience needed it. The funereal opening yields to incredibly wide contrasts, clattering col legno in the lower strings in particular giving the impression that the 'Resurrection' is something we might never actually arrive at. Throughout, Rattle marshals his players enough to let the schizophrenic terror of the movement have its effect.

With the five-minute gap duly observed, the remainder of the symphony retains the opening's wilful habit of shuddering between extremes. Momentum is paramount in the early stages of the darkly capricious third movement, but the goal is what Mahler called the "death shriek" of the movement. Here, it's given plenty of orchestral clout, but it's the way Rattle encourages the orchestra to die away from it that impresses. Mezzo-soprano Magdalena Kozena's careful turn in the concertante-style fourth movement is the only element on the whole disc that could have used a little more eruptive force, but as a moment of calm before the storm of the finale, it's still plainly enjoyable.

Beginning with another iteration of that "death shriek", terror is once again firmly established in the finale, and it's with a glorious sense of impending doom that we are guided through offstage brass fanfares and tittering woodwind. Exultantly we are drawn onward, though, toward the inevitable choral closing section, which is positively heaven-sent when it finally arrives. It's a stretch for any choir to perform it convincingly given the exceptionally wide vocal range, but the tension is so deftly and powerfully built throughout it that it doesn't seem testing at all. Tension is built in a pleasingly covert manner by Rattle, by this point surely convinced that the hard work is over, until the concluding release. It's one of the more climactic endings in the symphonic repertoire, and in Rattle's hands it is supremely thrilling. "Die I shall, so as to live!" so the chorus belts – and it seems that's exactly what was going through their heads. 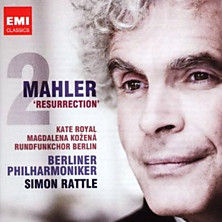