The South African covers a hodgepodge of styles – but move with him and it’s worth it.

Quite often, the prospect of this sort of eclecticism, appetising in all its multiple ingredients on paper, can make for dismaying fare on record, a regurgitated dog's breakfast, a spoiled broth. And certainly, Mathambo leaps about on a hotplate of styles, rarely dwelling on a groove for long. Move with him, though, because it's worth the breakneck effort.

Sub Pop might seem an odd label for Mathambo to throw in his lot with, but Let Them Talk effortlessly and naturally mutates into a dandruff cloud-generating squall of grunge, a new facet to Mathambo's live sound.

The skinnier, digital Venison Fingers is zippy and searing, an indictment of creeping, local and global greed. Put Some Red on It, about the diamond trade and already the subject of remixes by the likes of Machinedrum and Telepathe, features synths drilling into the temples, nagging the conscience. Skorokoro (Walking Away) changes tack again, with its snaking, dubsteppy Moog, firefly keys and hypnotic central chant. The title track draws on Mathambo's private hauntology, a jingle that has been embedded in his memory since childhood. And Closer Grave slows the pace right down, a sobering, plaintively pensive note on which to conclude.

If Mathambo's brand of eclecticism works, it's maybe to do with his township upbringing. This is no postmodern cornucopia of past and present sounds, a celebration of the easy-access, have-it-all age. Instead, it’s produced out of an understanding of what it means to have very little, and with a true respect for the value of material sources. 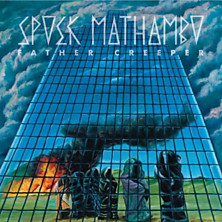