Peace take the past and swish it about with a bit swagger, and the results are just dandy.

Whether or not you fall in love with Peace depends how much stock you put in originality. The Birmingham four-piece are clearly the sum of their influences, but their debut album brims with such gusto and powerful tunes that it'd take a heart of stone not to weaken in the face of its chutzpah.

One of 2013's biggest indie hopes, Peace have already fired off impressive salvos in last year's Follow Baby single and the Delicious EP – both represented here to greater or lesser extent – and the rest of In Love is more than a match for those calling cards.

Their inspiration is easily pinpointed. This is the Britpop revival 20 years on, with a sprinkle of Summer of Love psychedelia and the odd lope of baggy, pretty much integral building blocks of Britpop anyway. In less-confident hands this would be an unnecessary rehash, but Peace have the belief to equal their songwriting chops.

That's down in no small part to singer Harrison Koisser, a bumptious combination of Mick Jagger and Kula Shaker's Crispian Mills that works against all odds. He can curl his lip with the best of them over the sleazy licks of Toxic, but blisses out like a gap-year mystic on the delicate California Daze, a survivor from that Delicious EP.

The other star is guitarist Doug Castle, whose snaky riffs on opening pair Higher Than the Sun and the remodelled Follow Baby are just irresistible. Peace's collective strength is in this combination of bold guitar and earworm choruses that pepper every track.

The swaying melodies of Float Forever and Sugarstone have maybe heard Oasis's Don't Look Back in Anger once too often, but that's the price of knowing your history. Otherwise Peace take the past and swish it about with a bit of swagger, and the results are just dandy. 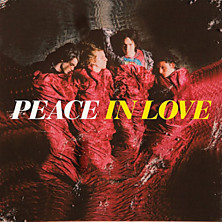