Another great album from the Canadian, posing the question: why is he not bigger?

In the summer of 2011, eternally boyish Canadian troubadour Ron Sexsmith endured a major health scare, an issue from which he has thankfully now fully recovered.

The wake-up call seems to have injected the 49-year-old’s typically melancholic pop signature with both an increased poignancy and, here and there on this, his lucky 13th long-player, moments of near rhapsody.

Indeed, Forever Endeavour could be Sexsmith’s most persuasive outing since his eponymous 1995 major label debut.

Everywhere, Sexsmith’s voice, a potent mélange of Jackson Browne, Tim Hardin and John Hiatt, ekes out every last nuance of melody, but with a seamless, almost conversational effortlessness.

Typically, early highlight If Only Avenue wraps ruefulness bordering on regret (“With the luxury of hindsight / The past becomes so clear / As I look out on the twilight / My days have become years.”) in undulating folds of decorous violins, punctuated here and there by bursts of Duane Eddy-recalling guitar twang.

The even more lavishly orchestrated Blind Eye alloys a yearning, Willy DeVille-like street-corner pop croon with warm-toned Al Green soulfulness and the odd wry apercu: “God must have gone fishing now / With all that hell’s dishing out.”

The exquisitely delivered, country-tinged Lost in Thought, meanwhile, could have slipped from the grooves of Elvis Costello’s Imperial Bedroom, if not the pages of the Great American Songbook; and the plangent, chiming McCartney-esque pop-rocker Back of the Hand is arguably the sunniest moment in the entire Sexsmith oeuvre.

It’s become a critics’ cliché to dismiss Sexsmith as a terminally unfashionable nearly man; a songwriter’s songwriter, enmeshed forever in the style and trappings of a bygone age.

But on this evidence, that’s really no bad thing – you could almost think of him as the straight Rufus Wainwright. His talent, if not his understated demeanour, surely deserves a profile to match that of his ostentatious (semi-)countryman. 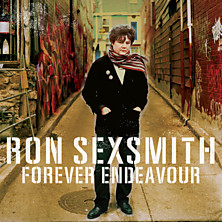