A collation and culmination of their finest work in years.

Let’s play a little word association. "The Walkmen"… "The Rat". It’s an immediate response. A reflex. A justifiably clichéd answer eternally associated with the band despite the fact they’re now six albums and a decade in. It’s still, undeniably, the hallmark, and often the brooding benchmark, The Walkmen are held against.

So, the resonant post-punk power of The Rat might will always hold a sentimental sway – from the black and white claustrophobia of the video to Hamilton Leithauser’s embittered voice, seething and beseeching some unknown soul – but The Walkmen have been steadfast in their move from the dark, driven post-punk of the Bows + Arrows era.

Whereas 2006’s A Hundred Miles Off was a step too far, a decisive attempt to distance themselves from their monochrome past, what we heard on 2008’s You & Me was altogether more promising. Hinged on a slight return to their more miserable past without disregarding the positive steps they’d taken to boldly move forward, it arguably set the foundation for the rising majesty of Lisbon.

Make no mistake, Lisbon is a grandstand album, a conclusion of what The Walkmen have been striving for these last three years. It’s rich and rewarding, Leithauser’s vocal emerging slightly stylised and crooning, adding weight and purpose to flickering guitar melodies and occasionally sparse backing but raging and soaring at all the right moments.

It’s a prolonged transition that’s ultimately, eventually served them spectacularly well with the maligned mariachi influences they tried to incorporate on A Hundred Miles Off selected and tempered to wonderfully waltzing effect, the bright eyed ditty-ish Woe is Me and album opener, Juveniles setting the warm, sepia-tinged tone for the album.

But where The Walkmen were once the urban soundtrack for turning up your coat collar and aimlessly wandering city streets, Leithauser’s presence and confidence theatrically insists otherwise. Like an addict convincing you that "everything’s okay" there’s still all the past doubt and dejection simpering in there somewhere; but it’s easier to buy into the sunny side up attitude when it’s as exultant and forceful as they’ve made it here.

Bluntly, Lisbon is a collation and culmination of their finest work in years. Rather than a selection of scattered snapshots, this time we’ve got the bigger picture. And it’s irresistible. 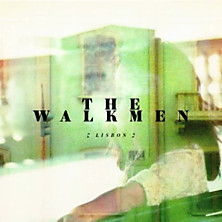