Tindersticks The Something Rain Review

Album nine from the Nottingham avant-pop outfit is as unconventional as ever.

A grainy, gritty depiction of real life, The Something Rain is the ninth album from the Nottingham avant-pop outfit led by Stuart Staples. It begins with Chocolate, a 10-minute spoken word tale set over an ambient, off-kilter, lounge-jazz soundscape, whose devilish punch line offsets the lugubrious, dour atmosphere of the piece. It’s an epic way to begin an album and a sure-fire indication that convention still plays no part in the compositions of the band.

Rarely a band to overly concern themselves with commercial successes, their last album, 2010’s Falling Down a Mountain, barely scraped the top 100 over here (but, oddly, made it to number two in the Greek charts). That, of course, is a good thing, allowing Staples and his often-changing cast of musicians to experiment, following their own idiosyncratic route rather than the whims of a record label.

At times, the results here are slightly obtuse, as on the melancholy fairground loop of A Night So Still or the creeping unease of Come Inside. But there’s something about Staples’ dulcet tone that, whatever direction the music takes, offers a sense of warmth and comfort to the listener – even if, at times, it’s also slightly disconcerting.

Still, The Something Rain is an album that demands attention. It’s not an easy listen, but it manages, somehow, to act as a kind of a soundtrack to your life, regardless of whether the specifics of the songs are in any way related to your own situation or experiences. Best saved for grey, gloomy days when the sky is covered by cloud – and let’s face it, there are enough of those – the likes of Frozen and instrumental outro/closer Goodbye Joe certainly summon a very English ennui, but one that’s wrapped in dual, conflicting layers of stoicism and sadness.

It may not be a Tindersticks classic, in the same vein as 1997’s sublime Curtains, but The Something Rain is a record full of mystery and intrigue that will keep you listening – and discovering new things each time – for a good while. 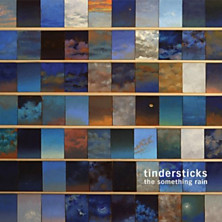