Supernatural has now surely sold enough to ensure that Carlos will never have to play...

In amongst the extensive credits and thank-yous on the sleeve of Shaman is a dedication to Arista boss Clive Davis whom Carlos calls: ''an architect of the highest order'', and well he might. Lost to the mists of time by the late 80s, the Mexican fretmaster owes a lot to the former head of Columbia who both gave him his first break way back in 1968 and, in 1999, masterminded the reincarnation of Santana as another of those artists savvy enough to call on younger 'friends' to give their album a truly cross-generational appeal. Supernatural has now surely sold enough to ensure that Carlos will never have to play with old strings again, but nevertheless here comes Supernatural Part 2. This album is a very safe bet indeed.

So stellar and diverse is the cast this time around that, were it not for the regulation latin flavour to each song and the big C's patent fuzztone wailings you'd think you were listening to a compilation. This is an album designed by committee. Over 16 tracks we get 12 different production teams, along with musicians and writers to match. Reliability takes the place of innovation and comparing this to, say, Lotus or Caravanserai is like comparing baby food to fillets mignon with sauce béarnaise. It becomes so safe as to be almost invisible.

Guests include Musiq, 16 year old Buffy-rocker Michelle Branch (with ''The Game Of Love'': a song by Gregg Alexander- here credited as Alex Ander -exactly like all his others), Seal, Macy Gray and Dido. All do precisely what's expected of them yet fail to really set the pulse fluttering. Macy's entry (''Amore (Sexo)'') tries to muster a little lusty latino sweat but falls short. Too often the material has Santana himself on autopilot and tries too hard to reach out to the Britney generation. ''Feels Like Fire'' is even Dido-lite for goodness sake. In amongst the cod-dance and ersatz salsa one track rises up as the one step too far. ''Novus'' sees Carlos grappling with Placido Domingo, no doubt to reach out to that 'classical chill-out' market that record company executives seem to think we all want. Approach with extreme caution.

In fairness, Santana's guitar work is as fine as its always been, though one has to remind oneself that this is the man who once made albums with real heavyweights like John Mclaughlin and Alice Coltrane. The two self-produced tracks (''Victory Is Won'' and Foo Foo")remind you that when it comes to fiery percussive work-outs he's still the master and ''One Of These Days'' with top Mexican collective Ozomatli is exactly where he should be heading. Carlos himself undoubtedly feels that Shaman reflects the rainbow of musical colours that he feels honoured to be able to blend etc. Yet this is a far cry from the spiritual healing he professes to bring, and one can't help being suspicious of a man whose album sleeve devotes a whole page to the 'Carlos' range of accessories (Women's shoes? Ties?!?). Everyone who bought Supernatural will love it. Anyone waiting for some exemplary latin-fusion...err...the door's over there... 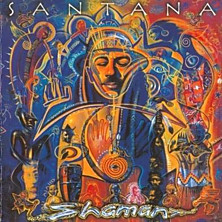