Rarely does a British debut album forge such a fully formed, genuinely unique direction that attempts to slot it into established scenes prove almost entirely fruitless. But Peanut Butter Blues and Melancholy Jam, the full-length bow of late-20s wisdom dispenser/producer Obaro 'Ghostpoet' Ejimiwe, achieves such a feat. You probably have to go back to Original Pirate Material, in fact, for similar impact.

Dubbing himself "a lad with a lisp with some stories to tell", the truth is a mite more complex, as hinted by the record's tricksy, somewhat over-self-aware title. His recent relocation from Coventry to London will doubtless ensure plentiful parallels with famed West Midlands to Big Smoke migrant Mike Skinner. But while sharing a knack for anxious streams of consciousness peppered with endearing everyday Brit culture references, Ejimiwe's subtleties outstrip The Streets.

Anybody who's had the misfortune to visit Coventry will agree the city is sufficiently depressing to breed levels of urban dread last equalled in Tricky's heyday. From stuttering, held-together-with-Sellotape-and-elastic-bands intro Onetwos onward, Ejimiwe's sleepy delivery owes little to any other UK rhymers, however, despite an air of a bedsit Roots Manuva, eyebrow-cocked self-deprecation and all. It's a fact he notes himself on I Just Don't Know, declaring "Other MCs want to talk about crime / But that ain't me..." before an off-kilter chorus that catches you so off-guard that gleefully humming along is the only logical response.

The album builds to a fascinating climax, the whisky-fuelled Cash and Carry Me Home succinctly encapsulating all the hungover loathing and creeping worry that follow an out-of-control drinking session, while Liiines is truly spirit-elevating with its "Life is too short to store up grudges" refrain. During the latter Ejimiwe complains that "I keep on writing, writing / But them folk ain't biting, biting". Such indifference, though, is about to change.

Hipster-hating hip hop aficionados may take one look at Ejimiwe and run a mile. Don't be dissuaded by his fashionable hat and spectacles: Peanut Butter Blues and Melancholy Jam throws its headgear into the ring as an early contender for 2011's finest out-of-leftfield long-players. 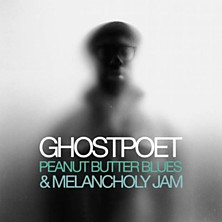