The Saints All Times Through Paradise Review

They were the first band outside the US to release a punk single (ahead of the Sex Pistols, The Clash, et al). Bob Geldof has said: "Rock music in the 70s was changed by three bands – the Pistols, Ramones and The Saints." They are lionised in their native Australia and their champions range from Nick Cave to Sonic Youth. Yet perhaps the Brisbane-formed outfit can’t convincingly claim "legendary" status here. This four-CD collection – released a few years back in Aus – aims to rectify that.

Having blazed a trail with their self-financed debut single (I’m) Stranded in September 1976, the band – Chris Bailey (singer), Ed Kuepper (guitarist) and Ivor Hay (drummer) – added bassist Kym Bradshaw and decamped to the UK, to optimise an explosion-of-punk press buzz. EMI promptly signed them to a three-album deal, and this set offers those albums with multiple bonus tracks and out-takes including the One Two Three Four EP plus a recently unearthed Live in London show (recorded at the Hope & Anchor in 77).

The (I’m) Stranded album is early punk in excelsis – buzzsaw guitars, Buzzcocks structures, two minutes of up-yours to The Man, Bailey’s blank snotty tones a gruff cry of disenchantment. 1978’s Eternally Yours, despite the ferocity of unlikely top 40 hit This Perfect Day (covered by The Fall), already sees them defying expectations. They bring in Stax-influenced horns and brass and, in their lyrics, mock the punk ethos, which they believed was rapidly becoming a glib, record-company-guided uniform. Know Your Product is self-explanatory, while Private Affair rants, "A new vogue for the now generation / A new profit in the same old game". They also took an energised pass at River Deep, Mountain High.

By third album Prehistoric Sounds they’d moved miles on, incorporating jazz and blues, covering Otis Redding, and in the mesmerising track which titles this set coming up with something that today sounds like The Stranglers’ Golden Brown if played by Pavement. The Saints were to fall out, Kuepper later enjoying success with Laughing Clowns and as a Bad Seed, but have latterly kissed and made up. They made a righteous noise. 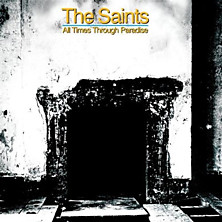