The Thrill Jockey vinyl-only reissue strategy bathes in nostalgia for a period long before this second Tortoise album’s original release in 1996. A solidly spinning LP platter artefact has become somewhat more fashionable now than back then, and this release is part of a sequence of Tortoise reissues scheduled for 2012.

This second album was responsible for turning on the majority of Tortoise followers. A sudden classic at the time, Millions… confidently holds onto its significance 16 years later. The Tortoise sound hasn’t dated significantly, and the Chicago combo’s descendants have continued to walk a similarly innovative path.

The gestation period was lengthy, as Tortoise composed and improvised for 10 days in Northern Vermont isolation. Then, they swiftly began recording once returned to Chicago, but the layering, mixing and editing process subsequently took on a diligently sprawling character.

The 21-minute epic Djed fills side one, opening with a creeping bassline, overlaid with all manner of storm-electronics, their interference source not immediately obvious. This scarred vista gives way to a developing beat, and suddenly it’s upended into an odd poppiness, chirpy and bright. Autobahn-period Kraftwerk must surely have been a key influence. Fender Rhodes electric piano is shadowed by melodica, as the experimental becomes infused with hummable content.

The dominance of particular instruments is evolving at any given time. Suddenly there’s a shimmering tambourine embellishment, and then there’s an apocalyptic break into extreme minimalist analogue rupture. This heralds phase two, a further 10 minutes of marimba and vibraphone pulsing, where the precedent has surely been set by Steve Reich. Then, the piece disintegrates once again into sparse electro-stress.

It’s inevitable that the remaining five tracks will be concise by comparison. Glass Museum revolves around a cycling twang-riff, breaking into a swift canter. This is one of the rare occasions when a vibraphone phrase can be termed "bullish". Hard edges surround The Taut and Tame, its runaway momentum supplied by a slithery bassline and determined snare drum. Subliminal synth rotor-blade effects are employed to skew any aural complacency.

The closing grooves emit a sense of calm, as Along the Banks of Rivers adopts a John Barry espionage flick feel, flooded with languid and twangy guitar licks. 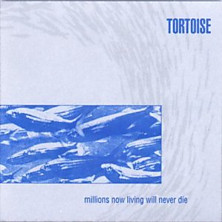