Over four decades since the six shows – recorded over three nights in October 1968 and documented in this four-CD set – that helped define the legend of Jimi Hendrix, it’s easy to forget just how groundbreaking he truly was. Other electric guitar heroes have come and gone, feedback is now an accepted part of the instrument’s arsenal, and the extended solo is largely the domain of the muso. But, despite his death less than two years later, Hendrix endures, and even the most hardened of cynics cannot deny the power of performances that robbed Eric Clapton of his reputation as the world’s best guitarist.

Obviously there’s none of the studio trickery here that he pioneered on his albums and which seduced fans back in the late 60s, but the dextrous fluidity of his playing, the enviable discipline of his band, The Experience – Noel Redding on bass, Mitch Mitchell on drums – and the effortlessly exuberant chemistry they shared are still extraordinary. The rawness of these performances is also impressive, the band magically keeping pace with Hendrix’s seemingly capricious fretwork despite the sense that no one, least of all Hendrix, knows where his fingers will lead him. Whether riffing around the simple blues of Red House, or, some might say, birthing the sound of heavy metal on Spanish Castle Magic, he succeeds in the unlikely task of making vocal melodies secondary to his instrument. The mind rolls with guitar lines that cannon around his songs, exploding sometimes with an extraordinary fury, at other times with unexpected tenderness. There is, of course, an inevitable masculinity to the whole sound, a flexing of musical muscles despite his between-song exhortations to free the mind. But this is offset by his sometimes-vulnerable vocal style, one that remains underappreciated and yet strangely charming.

Naturally, four discs is a whole lotta Hendrix, and as an entry point into his oeuvre it’s a little excessive. But such was the nature of his shows that no two performances sound the same, and that in itself further underlines why these shows have been so widely bootlegged in the 43 years since. Listening to the trio barrelling from Hey Joe to Purple Haze and finally Wild Thing on disc three alone should be proof enough that the legend is more than deserved, and the beauty of Hendrix’s talent is that, however often one hears his recordings, he still retains the ability to surprise. It’s no wonder that the man is still synonymous with guitar virtuosity: no one has ever eclipsed him. 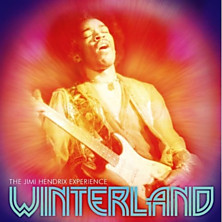