If you're missing Darius and you're after a bunch of mid-tempo pop songs to ease you...

The penultimate Blue boy to release a solo album, the swoonworthy Duncan James returns wearing the same haircut as when we met him in 2001. Future Past isn't an album full of exciting pop songs to get your blood rushing, but if you're missing Darius and after a bunch of mid-tempo pop songs to ease you through the day then this might just be it.

The country tinged "Suffer" oozes Ronan, both in its melodic twangs and James' seeming impressions of the Irish star's style of singing. "Can't Stop A River", written by Grammy award winner Seal, is a competant ballad, yet it never ascends beyond the ordinary. While boasting 11 original songs, the heartthrob finds room for a exact cover of Lonestar's "Amazed". Although a beautiful song, here it seems somewhat defunct.

Claiming serious pop writers such as Stephen Lipson and Peter Vetesse on his album notes, Duncan's younger fans should stay well away. He's no longer your pin up - but your mum's. 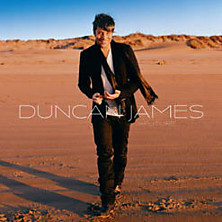