After the show came the reality. Fractured, dislocated and expansive, The Beatles – housed in its legendary plain white, subtly embossed sleeve – came out in November 1968. It arrived at a time when both the group and the world had changed irrevocably: the former since their first forays into fame and fortune, the latter scarred by the ongoing war in Vietnam and the assassination of Martin Luther King, to touch upon the tip of the iceberg.

From the inside looking out, maybe everything wasn't going to be alright, despite John Lennon’s assurances on the rousing Revolution 1, just one of many highlights on what is perhaps The Beatles’ most ambitious studio album.

After writing dozens of songs while meditating in India in the spring, the group returned to Abbey Road – and Trident, in Soho – to record over 30 tracks of new material up until the summer. When you think of how unrest had started to simmer within the group's ranks – Yoko Ono arriving in the studio; Apple forming; Ringo leaving and then returning – and how broad the album's palette of sounds (blue beat, heavy metal, folk and doo-wop, to name a few), The Beatles still manages to hang together like few other works.

The Lennon and Paul McCartney stereotypes are at once reinforced, yet also dismissed – few would have thought Good Night was the product of Lennon’s pen, and likewise Helter Skelter didn’t immediately scream McCartney. Away from such showpieces, it's the doodles that delight – George Harrison's Savoy Truffle is a fine counterweight to While My Guitar Gently Weeps, and Everybody's Got Something to Hide Except For Me and My Monkey balances the gravitas of Revolution 1.

Given that it also contains Lennon, Ono and Harrison's nine-minute noise collage Revolution 9 and McCartney's genuinely pointless Wild Honey Pie, it’s little wonder that producer George Martin always opined that The Beatles could have made a splendid single album. That said, without such variety on offer, the compiling of one’s own version wouldn’t be the national pastime it is today. 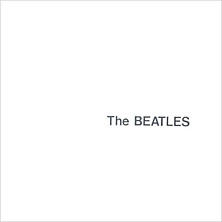