Bach Collegium Japan's deservedly acclaimed project to record all of Bach's cantatas has reached volume 51, which turns out to be an especially vibrant and generously filled collection of sacred occasional works.

These sit outside the bulk of Bach's sacred cantatas, not part of the cycles for Sundays and feast days of the church year. But, though little is known about the circumstances of their original performances other than that they were privately commissioned by wealthy patrons, conductor Masaaki Suzuki and his well-honed forces lavish at least as much loving attention on them as usual.

Fluently stylish and idiomatic, the performers live and breathe Bach's music with as much immediacy as if it had been composed yesterday.

The first cantata on the album, BWV 195, is a joyous trumpet-and-drums affair, written in the last years of Bach's life for what must have been particularly sumptuous wedding celebrations. The orchestra is one of Bach's biggest, including pairs of flutes and oboes as well as three trombones.

Suzuki and company revel in the grand forces – the opening and closing movements brim with festive ebullience – while retaining their customary crispness and buoyancy and clean, unfussy choral singing.

BWV 195 is also notable for a bass aria that is remarkably forward-looking in style. With rich, oboe d'amore-infused scoring and jovial scotch-snap rhythms, the late-1740s musical language sounds uncannily like that of Bach's sons. Listen out, too, for the wonderful effect of cascading flutes in a soprano recitative.

At the other end of the scale, the gently meditative funeral cantata BWV 157 is scored for modest chamber forces with one-to-a-part quartet of singers – a subtle and delicate combination realised by the Japan players with radiant beauty.

There are no standout stars among the vocal soloists – soprano Hana Blazikova, counter-tenor Damien Guillon, tenor Christoph Genz and veteran bass Peter Kooij – but neither are there any weak links. Each delivers solid performances, taking solos with aplomb and working well as a team.

The accounts of the two other cantatas here, BWV 192 and 120a, are equally delightful, making this latest volume one of the very best and most joyful in the series so far. 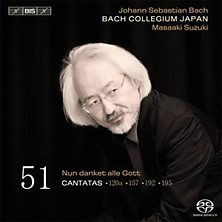