Eastwood’s finest album to date, with a timeless quality.

Now that he is into his mid-40s and has released six albums in his 15 years as leader, no lingering doubt can remain that bassist and composer Kyle Eastwood has stepped out of the formidable shadow of his father.

Although he gained valuable experience working on the soundtracks of films such as The Rookie and Mystic River, the greatest legacy Kyle received from Clint was a childhood steeped in music, particularly jazz.

Living in Carmel, close to Monterey, the Eastwoods were regulars at the annual jazz festival, and his father’s A-list status meant that the young Kyle got to meet such luminaries as Dizzy Gillespie and Sarah Vaughn.

Added to a diet of classic jazz at home, such experiences educated him well in the language of jazz – and the results are still readily apparent on The View From Here.

Eastwood is a long-standing resident of Paris, and this album was recorded in September 2012 at one of France’s finest studios, La Buissonne, near Avignon.

Alongside the bassist, a classic line-up is completed by saxophonist Graeme Blevins, trumpeter Quentin Collins, pianist Andrew McCormack and drummer Martyn Kaine. The five have played together for several years, forming them into a unit which is loose and funky, with the members comfortable in each other’s company.

The album’s 11 compositions originated within the band, with all of them contributing but Eastwood dominating the composer credits. McCormack, Eastwood and Kaine make a solid rhythm section, laying down a reliable foundation which supports some inventive soloing – notably from McCormack whose performance on the snappy Sirocco exemplifies his flair.

Collins and Blevins are particularly effective in tandem. Whether playing a melody line in unison and then trading solos on the title track, or interweaving lines at the climax of Collins’ stunning Mistral, they help the quintet conjure up the sound and spirit of Art Blakey’s Jazz Messengers.

The end result is Eastwood’s finest album to date, one which has a timeless quality and nothing to pin it to the 21st century. In fact, it could easily have originated in any of the past four decades. 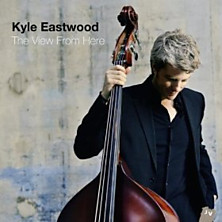