Factory Records is today seen as some kind of peerless, fertile breeding ground for everything good that followed Punk’s initial three-minute explosion. But the label’s roster was as filled with as many misses as hits. Any specific ‘house style’ had more to do with the fact that 1977-8 had left Britain littered with young bands raised on Berlin-era Bowie and eager to emulate the DIY aesthetics now filling John Peel’s playlist. If Blackpool’s Section 25 sound a lot like Joy Division then it’s more to do with the fact that the collision of New York minimalism with disco hedonism was bound to produce a slew of acts that combined the rattling metronomic high hat with scratchy, barely competent guitars.

Actually the first album by Section 25 is a perfectly fine blend of sub-PiL dance politics and Northern existentialism. To modern ears it sounds pretty much like a large number of ‘ironic’ indie acts plying their weary secondhand trade today. Their first sessions had actually been co-produced by Joy Division’s Ian Curtis, yielding the single “Girls Don’t Count” (included on reissues of the album) but by the time they hit the studio for Always Now it was the mercurial Martin Hannett who sat behind the desk. In his hands the band’s somewhat four-to-the-floor dourness was fed through the same judicious array of digital effects to produce that desolate-yet-spacey sound that bestowed on Factory’s acts the special ‘air’ of being in the vanguard.

By being in the Factory stable they were undoubtedly there at most of the seminal moments of Manchester’s post-punk years (Curtis famously getting his head kicked in at one of their gigs when he attacked a heckler). Yet the band’s finest moments were in their future. At the time of Always Now their material seemed somewhat aimless (“Melt Close” and “CP” especially) or in thrall to their peers (“Dirty Disco”). It contains all the necessary detachment and sang froid yet lacks the brave bleakeness and focus of Joy Division or the hot white funk of A Certain Ratio.

Luckily the band saw their way through a temporary split in 1982 to come back with a more vigorous electronic edge and still operate to this day. But their debut, while sounding every bit as good as many of today's young pretenders, remains a curio best left for the diehards... 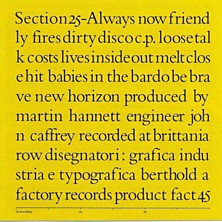