Hole Live Through This Review

Thankfully, with every year that passes, it becomes easier to put the record’s...

It's nearly thirteen years since Hole released Live Through This, their second album. It was their breakthrough into the major league, and proved to be the best of their career. But with Kurt Cobain's death coming just days before the album’s release, none of this mattered. In 1994 and the years that followed, tragedy and controversy seemed to overshadow everything Courtney Love touched. Thankfully, with every year that passes, it becomes easier to put the record’s emotional baggage to one side and appraise it on the strength of its songs.

Violet gives the album a venomous jumpstart, with Love picking up more or less where she left off on Hole's 2001 debut Pretty On The Inside, wailing pure vitriol. However, there was a newfound sweetness to the music and mixing that Hole hadn’t shown before. The quiet-loud grunge dynamic was Nevermind through and through - the verses swimming in chorus pedals, the choruses raging with bile and fuzz (Miss World is particularly formulaic here).

Hole v2.0 sounded like a different animal. The predominantly acoustic strummer, Softer, Softest must have come as a shock to any hardcore followers, but Love obviously still had her demons. “Some day, you will ache like I ache”, she sings on the downbeat lead single, Doll Parts.

Love had rebuilt a sturdier rhythm section for Live Through This, bringing in bassist Kristen Pfaff and drummer Patty Schemel. With their vicious edge softened a touch to make way for some honeyed melodies, the resulting balance making them more accessible. Sadly, the line-up didn't last long, with Pfaff dying from a heroin overdose just two months after Cobain's suicide.

With so much heartbreak surrounding the album, there's no escaping the pathos of lines like ''All my friends are dead and gone'' (Gutless). But look past this, and you'll find the album still manages to invigorate and inspire. Across their three studio albums, Hole made the transition from raucous punk to power pop with ease, and their progression was admirable. Without Hole, it's fair to say there would have been no Distillers. Likewise, the Yeah Yeah Yeah's Karen O probably owes more to Courtney Love than she's ever likely to admit. 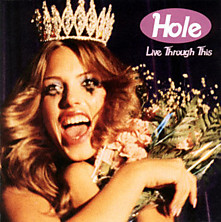