Strip away the nonsense surrounding its maker since, and Faith is an enduring pop classic.

Even now, by today’s accelerated standards, that in a five-year span George Michael went from singing about having fun on the dole, simultaneously launching a solo career while clocking up a string of global chart-toppers with his mate Andrew, to multi-platinum success in America, is still rather mind-blowing.

It’s a career trajectory that has fuelled the most ambitious artists in his wake, desperate to emulate such a broad crossover. And who could blame them? The stats speak for themselves – 1987’s Faith album, here reissued across multiple formats including a special edition including bonus remixes and promo videos, sold 20 million worldwide, six of its 10 tracks were released as singles, and four of those went number one in the US (although curiously none of them went to number one in the UK). It contained some of his most enduring tunes, not least the title-track itself.

Ninety-nine percent made, produced, played and written by George himself, there are songs on here that would go on to outlive their parent album. Take One More Try, a timeless bit of soul imbued with regret and longing, and a wisdom that betrays the then-24-year-old artist behind it. The gospel-tinged Father Figure and jazzy Kissing a Fool too made those "new Elton John" claims not just a load of bluff. Time perhaps hasn’t been so kind to the Synclavier-soaked 80s-ness of Monkey, and, bearing in mind it was banned for being too raunchy at the time, I Want Your Sex seems positively quaint nearly 25 years on.

Of course hindsight is a handy tool, allowing one to spot the signs of what was to come more easily than one could at the time. But stripped of the nonsense – the car crashes, the spliffs, the troubled soul who ill-advisedly nips out for some late-night liaisons and the recent prison spell – Faith still endures as one of the more listenable major releases of the 80s. While he’d never scale these heights again – he started his retreat from the frontline after touring it solidly for two years – Faith made George into a proper international superstar, confirming his rightful place at pop’s top table. Listening to it today, marvelling at his seemingly effortless way with a tune, it’s understandable why it remains a classic of its era. 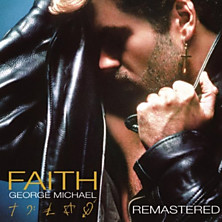