Though not without its moments, 1971’s Fireball described something of a non-descript holding pattern for Deep Purple. Not a bad album as such it was, artistically at least, a curious underachiever compared to In Rock. What they needed was something with as much impact and which delivered them new standards to ensure their upwards path. With not a lot of spare change in the pocket as far as new material went, the recording session was a fraught affair. Yet out of such adversity, Purple dug deep into their reserves producing their strongest and most consistent set.

Released in 1972, Machine Head become the benchmark against which everything that followed would be judged against. In the canon of heavy rock this is an album replete with classic tracks. Concise in nature, killer punches are only ever a minute away no matter which song you play. Vocalist Ian Gillan excels himself on “Highway Star,” and “Never Before”, the latter an excellent single, released ahead of the album covering both pop, rock and some righteously funky turn-arounds. Blackmore dominates the album turning in some of his most understated and reflective playing on “When A Blind Man Cries” (the b-side to the single and not included on the original album) and of course, “Smoke On The Water.”

Its devastating simplicity is the foundation stone of the whole record and one of rock’s most archetypal riffs. Not only heavy as hell, it was insanely catchy and the long-haired denim-wearing world grasped it to their bosom without a moment’s hesitation. Detailing the burning of the casino near Lake Geneva (which caused yer actual smoke on the water), the lyrical content perhaps presaged the internal fires that would consume the group.

Released in May it went straight to number one but by August Gillan had resigned. Though he would stay on to record the live Made In Japan and the lack-lustre, Who Do We Think We Are, the mark II line-up was all over bar the shouting – and there was going to be plenty of that. Machine Head however remains their finest hour. 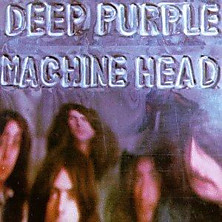