No Age Everything in Between Review

LA art-punks prove their worth with an enthralling, adventurous new album.

This latest offering marks a momentous point in No Age’s career: it’s carry on paddling or make a huge splash time. Their 2007 debut-of-sorts Weirdo Rippers, which collected single and EP tracks, and its follow-up Nouns, released just a year later, were enjoyable romps through the joys of noise but hardly left an impact. Everything in Between, however, shows that the Los Angeles duo have not only been seriously exploring experimentation, but it also sees them hone a new-found ear for infectious melodies. It’s a dizzying combination when done well, as it is here.

So it’s all change from the off, as Life Prowler’s buzzing guitars and thumped drums build and build into a thoroughly epic opener filled with grace, melancholy and beauty – three striking new developments in the No Age sound. Glitter continues with this eerie atmosphere, albeit with the occasional screeching riff thrown in. By the time the Dinosaur Jr.-esque Fever Dreaming is unleashed, Everything in Between has really kicked off, this furious, ferocious and frenetic track seriously picking up the pace of the record.

Just when you think you’ve got them pegged, of course, No Age morph again. Depletion, Common Heat and Skinned are thrillingly catchy, the latter’s crunchy rhythms and numerous key changes making it a real high point. But Katerpillar is the first of four dreamy instrumental efforts, the last of which, Positive Amputation, features a piano and brooding Mogwai-isms. Nobody saw that one coming. And these bold forays into new territories continue right up until the record’s final breath of Chem Trails, which features guitars that sigh with longing and a call-and-response exchange from riff-man Randy Randall and drummer Dean Allan Spunt that works incredibly well.

Singing is not really a No Age strong point and quite frankly never has been; expectedly, the lacklustre delivery of the vocals throughout this album is its only slight shortcoming. The power of its songwriting and compelling twists and turns are more than enough to carry it though, and it warrants listen after listen after listen. Perhaps most excitingly of all, Everything in Between proves that No Age are not afraid to push their trademark ragged sound to different places entirely. It all bodes very well indeed. 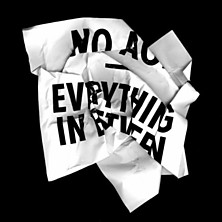