This album shows she can indeed dig deep and has brought out a genre bending, personal...

A Little Deeper is the acclaimed debut album from North London's finest Ms Dynamite aka Naomi McLean Daley who initially grabbed the nations attention as the bolshi MC on the Sticky produced Booo!

Expect a sixty-minute introduction into the life and strife of this gifted twenty two year old. A smooth head nodding ride through heartbreak care of tracks "Sick n Tired", "Now You Want My Love", bad relationships "Gotta Let You Know" and a plethora of warning messages against the pitfalls of today's social ills typified by acapella "Watch Over Them". There's even an ode to her baby brother. Essentially, Dynamite wants you to learn from her mistakes and the mistakes of others to be the best that you can be. Sentiments that on occasion come across as slightly preachy.

What the album isn't is a repeat of Booo! (check out her limited release garage album A Little Darker for that) In search of world domination, Dynamite has decided somewhat wisely to broaden her appeal beyond the UK garage scene. Hence why generous production credit is down to Salaam Remi, best known as the guy behind the sound of the Fugees multi-platinum release, The Score. The 'there is something for everyone' attitude is stamped all over this debut effort with slow R&B numbers "All I Ever" rubbing shoulders alongside hip hop flavas "Get Up Stand Up" and electro influenced "Krazy Krush" each held together with the recurring undercurrent of dancehall.

Stand out tunes include singles "It Takes More" and "Dy-Na-Mi-Tee" plus Latin tinged "Put Him Out", reggae duet "Seed Will Grow" featuring Kymani Marley and title track "A Little Deeper". Jamaican music legend Barrington Levy features on a classy rendition of "Too Experienced".

Vocally, whilst a unique talent, Dynamite's Lauryn Hill meets Nelly Furtado tone has definite room for growth but this album shows she can indeed dig deep and has brought out a genre bending, personal musical journey that is likely to be a prelude for greater things yet to come. This is the sound of today's troubled urban multi-cultural British youth, slickly packaged to appeal to the masses. 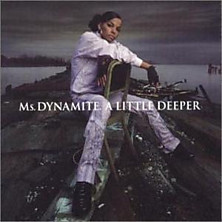