Joanna Newsom Have One on Me Review

It seems almost inconceivable she could produce anything unremarkable.

Looking from the outside, the job of following up Ys – the 2006 album that transformed San Francisco harpist Joanna Newsom from kooky cult concern to a musician widely regarded as one of the more gifted composers of the age – appeared a task most unenviable. Epic in scope, with arrangements steeped in jazz and world music and lyrics prone to dazzling flights of archaic language more befitting of William Faulkner than any modern songbook, it was so exceptional as to beg the question: where next?

Have One on Me answers that question in both prosaic and surprising ways. For one, perhaps predictably, it’s bigger still – clocking in at three CDs and over two hours of music, this is about as big as albums get. There are unexpected changes here, too – primarily, the quality of Newsom’s voice. Once raw and child-like, following a period recovering from vocal-chord nodes, it has now developed into something more classically pretty, although hints of the old grizzle still re-emerge occasionally.

The precocity of the lyrics has been toned down a little, too; songs sprawl less, and hang on concise, wonderful phrases. “I found a little plot of land, in the garden of Eden,” she sings on ’81, while Kingfisher commences with a soft entreaty: “Whose is the hand that I will hold?” Her voice is almost a whisper: “Whose is the face I will see?” Still present, though, is a raft of nature imagery. The title track is an impressive bestiary of daddy long-legs, tarantulas and “famous spider dances”, while on Esme she is confused “like the wagging bob-tail of a bulldog” – probably not one you’ve heard before.

What, aside from length, really defines Have One on Me in contrast to Newsom’s previous work is its confluence of styles. With Newsom moving back and forth between harp and piano and added instrumentation supplied by Ys Street Band leader Ryan Francesconi, the range here feels much broader. Good Intentions Paving Company toys with gospel soul and bluegrass banjo, while the excellent Baby Birch is lonesome country that builds into a majestic strut of spindly electric guitar and oriental melodies.

As an album, it is huge, sometimes overwhelming – but such is the strength and individuality of Newsom’s vision, it seems almost inconceivable she could produce anything unremarkable. 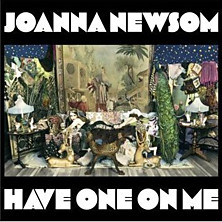