A vibrant, evocative LP, and a welcome addition to the Phosphorescent catalogue.

Duly equipped, he began cooking up “strange sound pieces”. “I was thinking I might make an ambient record that had vocals, but no lyrics,” he says of this period.

A sudden, unexplained domestic crisis forced his hand, however, leading to an impulsive trip down to Mexico’s Yucután peninsula in the opening months of 2012.

He spent a week there, living in a beach hut and working on his songs, before returning to New York and restoring some sense of order to his life.

At its best Muchacho reflects this yearning for tranquillity, offering the listener a window into Houck’s fuzzy and bruised yet generally hopeful mindset.

Song for Zula is a remarkable thing. Coasting on soft, electronic beats and programmed strings, Houck imparts a devastating clutch of verses that undermine the notion of love as something transcendent and divine.

Instead, he paints it “a caging thing ... a killer come to call from some awful dream”. A sense of the hurt it was presumably born out of lingers strong, completely at odds with the music it rests upon. The effect is mesmerising.

Songs like Ride On / Right On and A Charm / A Blade don’t fare quite so well. The former is built around a two-note riff and an insouciant, yelping vocal that is especially jarring in the wake of something like Song for Zula, while the latter lapses into classic rock cliché just a little too wholeheartedly.

Yet Muchacho’s Tune is as frank and lovely a promise of redemption as you’re likely to hear all year. Weighty, elegant music is a more natural fit for Houck, as songs like this and A New Anhedonia emphatically confirm.

Over the back-end of the LP he heads deeper into this kind of sweeping territory, brushing aside earlier missteps. Muchacho is a vibrant, evocative LP, and a welcome addition to the Phosphorescent catalogue. 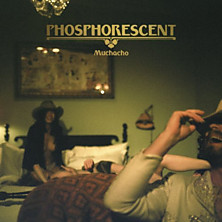