Ben Frost By the Throat Review

Reaches right out of the thought bubble and punches you out of your skin.

The much-bandied word ‘ambient’ implies something liquid, even gaseous – a balmy, Radox swirl, or pleasingly evocative, beatless atmospherics. Australia-born Ben Frost, who is currently based in Iceland, gives the lie to all of that. By the Throat is as solid and physically assaultive an experience as the title of this, his fourth album attests. It would be only halfway accurate to describe this as a soundtrack to an imaginary horror movie. By the Throat reaches right out of the thought bubble and punches you out of your skin.

Like Fennesz, Ben Frost works with a mixture of electronics and processed guitar, wreaking extreme sounds from the instrument that you could only achieve with the mediation of a laptop. He's supplemented and assisted here by composer Nico Muhly, Arcade Fire drummer Jeremy Gara, all-female Icelandic string quartet Amiina and all-male Swedish metal band Crowpath. Opener Killshot hauls itself across electronic coals in dense, metal lumps, before giving way to simulated lupine howls on The Carpathians which themselves give way to an uneasy, sombre hiatus reminiscent of Arvo Part.

The low-end rumble of looming threat, however, seems only ever yards away, as the growls of what could be some giant cat from Bodmin Moor pawing at the door gradually overwhelm Hibakusja. Peter Venkman, Part I contrasts burrowing cello with the holographic, ethereal choral broadsides heaving in and out like strafing chariots of archangels, before the mood recedes once more, into the anxious, muted brass of Peter Venkman, Part II.

There's a tinkling subcurrent of subdued activity running through By the Throat, and this surfaces on the deceptively banal interlude of Leo Needs a New Pair of Shoes. But then the painless violence resumes with the closing three tracks, Through the Glass of the Roof, Through the Roof of Your Mouth and Through the Mouth of Your Eye, in which musique concrete lumps scrape and grind and some monster appears to give birth to a pair of bagpipes by way of a finale.

It's probably no coincidence that By the Throat should have been made in Iceland, with its own, strong community of musicians who draw on the mysterious energies of a country whose landscape is as palpable and remote as that of the moon. 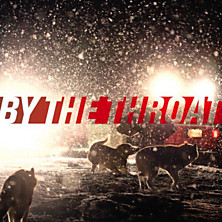