Offers enough revelations to suggest the original album is worth revisiting.

They're rarely essential, and often a cash-in, but it's tempting to invest this remix album with an additional purpose – whether it's intentional or not. Since its release in May, Lady Gaga's Born This Way album has racked up sales figures only Adele could wrinkle her schnozzle at. Yet somehow, it looks destined to become that most curious of chart beasts: the international unit-shifter that no-one really seems to love. So could this compendium of trendy reinventions – on which the likes of Wild Beasts and The Horrors play Gok Wan with tracks from the original – restore some lustre?

When it comes to retooling those pretty ubiquitous singles, fortune favours the brave. Metronomy swap Shania Twain for Imogen Heap on Yoü and I; The Weeknd and Illangelo put the spook up Marry the Night; and Goldfrapp remodel Judas into a doom-laden industrial stomp. Best of all is Twin Shadow's revamp of the title-track, which is so infectious and 80s-sounding that Molly Ringwald would declare it “bitchin'!”. On the flip, Foster the People and Canadian house duo Sultan & Ned Shepard make the same mistake with The Edge of Glory, both turning in a fairly predictable club banger makeover.

Elsewhere, surprises come when the album's lesser-known gems are given a grind, spit and polish. The Horrors turn Bloody Mary into vampire disco floor-filler, while Two Door Cinema Club almost make Electric Chapel sound like a collaboration between Gaga and Hot Chip. Moments like these offer a welcome reminder that Born This Way isn't short of tunes – or, for all its mega-pop bombast, a shot or two of oddness.

Of course, most of what's here already appears on sundry download bundles and CD singles, so it's easy to dismiss Born This Way: The Remix as, yes, inessential and, yes, a cash-in. But taken as a whole, this release offers enough revelations to suggest the original album is worth revisiting. That additional purpose, whether intentional or not, feels at least partly fulfilled. 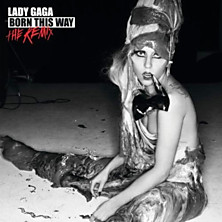