They're sonic as well as musical explorers.

Humcrush are Norwegian percussionist Thomas Strønen and keyboard player Ståle Storløkken, perhaps best known for their work with Food and Supersilent respectively. Rest At Worlds End is a varied work set that melds improvisation and electronica into something that sounds both contemporary and intriguingly original.

Humcrush's third album was recorded at a number of concerts across Europe - though if this wasn't stated on the sleeve it would be impossible to tell due to the lack of audience noise and the pristine quality of the recording.

Full of light and shade, Rest At Worlds End is by turns agitated and contemplative. Stream indulges the former quality and attacks the listener like a swarm of angry bees. Noisy and abstract, it's propelled forward by __Strønen's eclectic percussion. Edingruv is hushed and oddly accented, while Audio Hydraulic tends to the minimal, taking inspiration from the sound world of Strønen's solo debut, Pohlitz.

Storløkken employs the eery synth sounds that have become his trademark - imagine the sound of a vengeful spirit at a particularly eery seance. Throughout, there's a discernible far eastern influence that connects Humcrush to compatriots like Arve Henriksen. In this they move far beyond the parochial into stranger and more beguiling territories.

Steam begins with delicately sounded percussion that reverberates into silence in a fashion that suggests the ambience of a temple. As a pounding bass drum stomps in, Storløkken traces delicate streamers of sound that conjure images of a distant procession, bright banners waving lazily in a gentle breeze. That's the thing with Humcrush's music: it's a wonderful stimulus to the imagination, provoking all sorts of exotic images. Humcrush are open to the resonances of sound. As such, they're sonic as well as musical explorers. 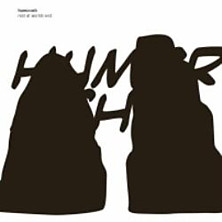