Alasdair Roberts and Friends Too Long in This Condition Review

A warm, accessible continuation of the tradition that delights with every listen.

The previous decade’s infatuation with all things locally sourced also took root in pop’s psyche, evidenced by the myriad genres that employed “folk” – that signifier of the organic – as a suffix. Whilst this century enters its teens, “rustica” shows no sign of abating as the likes of Mumford & Sons and Stornoway grace the upper echelons of the charts with their crowd-pleasing bonhomie. Far removed from such welly-wearing-chic, contemporary folk flourishes and its very essence – the sharing of archaic stories between generations – is sustained by musicians like Alasdair Roberts.

Roberts’ evolution from his lo-fi songsmith alter-ego Appendix Out to traditionalist troubadour is a fascinating one which has encompassed several albums so far. Too Long in This Condition continues his recent career trajectory being a collection of traditionally arranged songs that further mine Europe’s musical and cultural heritage.

The age old adage “all human life is here” can be applied to the world’s vast folkloric stock but Roberts has tended to draw upon the canon’s darker aspects, and Too Long in This Condition is no exception. Murderous intent lurks amidst tales like Young Emily, Little Sir Hugh and Long Lankin, whilst the eerie sensuality of The Daemon Lover is a compelling, near intoxicating opening gambit. The Lover’s Ghost is a heartbreaking lament, but there’s room for light too: Kilmahog Saturday Afternoon, written by Robert’s father, Alan, is a joyous slice of wordless brevity in which the distinctive sound of an Ozark harp strikes up a jaunty melody. Roberts’ spindly guitar playing is fleshed out by his yearning brogue and a cast of players that couch his tales in diverse, albeit dry, tones. Stevie Jones’ upright bass resonates and adds tuneful punch to proceedings whilst Shane Connolly’s drums on The Burning of Auchindoun mainline the kind of strident folk-funk breaks last heard almost 40 years ago on Pentangle’s Reflection album.

A testament to the depth of Roberts’ immersion in his music is how natural this album sounds. It doesn’t feel like a fastidiously researched academic treatise but a warm, accessible continuation of the tradition that delights with every listen, and sits a million miles from the nouveau tractor cognoscenti. 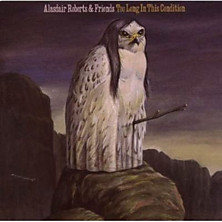