In this limited edition double CD (produced by singer/bassist Meshell Ndegeocello), saxophonist Ron Blake's borrowing from other genres doesn't detract from his ability to play some solidly improvised and original jazz. Even when falling for the 'nu' jazz trend of hooking up with DJs, he keeps things separate. He makes a jazz album first (disc 1), and then allows separate ground for the turntablists to remix five of the original tracks (disc 2).

Blake immediately steps on the accelerator (aided by Chris Dave's solid drumming and Christian McBride's bass line) with the Coltranean "Invocation".The sudden shift from tenor to soprano is somehow reminiscent of Wayne Shorter's Native Dancer. A rearranged version of the same track closes the album ("Invocation - Dance of Fire"), but by favouring flute over soprano, Blake returns a less intense, yet far dreamier catch.

It's hard not to be captivated by the way Blake renders the Ellingtonian "Dance of Passion" (the original by Johnny Griffin is nicely adorned with African quotations); or by his own, Caribbean flavoured "Tom Blake (Revisited)".

If with "Shades of Brown" one perhaps hears distant echoes of the writing of early Joshua Redman or Roy Hargrove, the wayBlake delivers the soulful pearl "Pure Imagination" brings John Coltrane back into the picture. "Pissarro's Floor" immediately follows and smoothly does it; with shivering, unbounded drumming and spot-on Fender Rhodes piano (from the wise hands of Michael Cain) a perfect carpet to Blake's robustly expressive tenor monologue.

Those are just few bites from Blake's articulate writing (most of the pieces carry his signature). Sonic Tonic is a preciously talented child, a restless creature whose vitality is by far its special quality. Unquestionably a lot is owed to a priceless ensemble. Blake's superb tone is a refined, expressive, muscular voice; an indispensable part of a captivating musical tale. Brilliant. 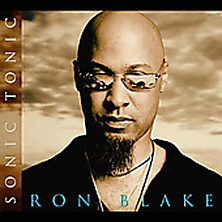