It’s been three years since the release of Sweet Billy Pilgrim’s Mercury Prize-nominated album, Twice Born Men, an eclectic mix of folkish tropes and indie-rock-orientated musing. Yet appropriately enough for a band whose name is taken from a character in a Kurt Vonnegut novel who became “unstuck in time”, the group have unhooked themselves from any particular genre, presenting instead a captivating mix that moves freely between supposed boundaries or categories.

Although the product of many hours in the writing and production process, Crown and Treaty avoids sounding overworked or belaboured, creating instead a soundworld of dazzling vitality. Much of this invigorating freshness emanates from the numerous layers of musical information that’s been lovingly threaded into each of these nine tracks.

The density of instrumental colour and dynamic ambition contained in every song makes them akin to symphonies in miniature. Joyful Reunion is typical of this approach, bristling with tooting Michael Nyman-like horns, sumptuous chorales, sonar pings, growling bass, and Tim Elsenburg’s gently unfurling vocals. He is joined once again by drummer Alistair Hamer and bassist Anthony Bishop, alongside recent recruit Jana Carpenter on guitar and vocals, whose presence is most obviously felt in the plaintive break-out vocal of Shadow Captain. Here, a tripping, rippling melody is powered by the churchy burr of a harmonium and sunny harmonies that Fleet Foxes would envy.

A witty, instinctual songwriter, Elsenburg creates intriguing portraits taken from life’s bigger picture, smartly using happenstance and the intersections of people and places as his subject matter. Such abstract notions find surprisingly accessible expression on tracks like Arrived at Upside Down. Complete with glistening celesta embellishments, Elsenburg marvels at what comes our way if we pay attention. Without compromising their artistic vision one iota, Sweet Billy Pilgrim have gone from black-and-white art-house to breathtaking widescreen, and the results are quite simply glorious. 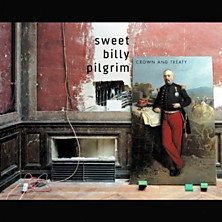