It’s the only opera I know starring a diva who’s over 300 years old, and still...

It’s the only opera I know starring a diva who’s over 300 years old, and still entrancing anyone who hears her. 16 year old Elina Makropulos was used as a guinea pig by her father, court physician to Emperor Rudolf II, who forced him to test an elixir of eternal life on his daughter. That was back in 1601…since when Elina fled Prague, changing her name every generation through Eugenia Montez, Elsa Müller, Ellian MacGregor…always E. M.

In 1924, back in Prague as Emilia Marty and with the elixir’s potency seeming at last to be coming to an end, she has a chance to find the formula because of a lawsuit involving the valuable estate of one of her old lovers, over a century earlier…but to get it she may have to sleep with her old flame’s great great great great great grandson, or possibly his son – and after three centuries, she’s no longer that interested in sex…

Unlikely material for an opera, but this was Janacek approaching 70, and aflame with desire for a married woman less than half his age, inspired by her to new heights of creativity. In ‘The Makropulos Case’ he’s comparing his heroine’s coldness and selfish behaviour to that of his reluctant muse…and the chilly abrasiveness of the libretto is matched by Janacek’s music: tough, uncompromising, with a series of tense exchanges and no extended arias. But that changes in the third act, as Emilia starts to lose her battle with the ageing process; as the rest of the cast discover her real identity, Janacek’s score warms, and blossoms into a radiantly beautiful conclusion.

Sir Charles Mackerras has recorded Makropulos before, in Czech with the Vienna Philharmonic for Decca – yet this English language version is not as disadvantaged as you might at first suspect. For a start, Mackerras’s insight and grip are as powerful as ever, and the ENO Orchestra’s playing is remarkable, giving away almost nothing to their expensive Viennese peers in accuracy or commitment. Australian soprano Cheryl Barker captures Emilia’s essential coldness, and the way she handles the final scenes is superb – you feel her desperation, and her imperious disdain. The other characters have as much life as Janacek allows them, with particularly fine singing from John Graham-Hall as the lawyer’s clerk Vitek, Elena Xanthoudakis as the innocent young Kristina, and John Wegner as the unpleasantly arrogant Baron Prus. The recording was made live at ENO, so there’s a feeling of onstage adrenaline, and the recording captures the performance with an intimate immediacy that puts the more distant Decca sound in the shade. Some pundits would insist that we listen to Janacek in his native Czech, as the rhythms of speech are such an integral part of his music, but this performance certainly doesn’t suffer for being in English, and that in itself is quite an achievement. 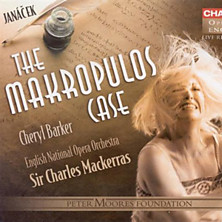