Two Gallants The Bloom and the Blight Review

The two-piece carves out a distinctive, powerful identity all of its own.

Two Gallants’ Adam Stephens and Tyson Vogel have been making music together since they were 12-years-old, and friends since they were only five. One assumes that's them on the album cover.

Following a five-year hiatus in which they both released solo efforts and Stephens suffered a serious van accident, this record is viewed as a “passage into adulthood”. It redefines them by, in part, looking back into their childhood, and the punk and grunge that inspired them to play together in the first place.

Esteemed producer John Congleton is onboard, and his presence can be felt immediately. Not that the San Francisco band has ever lacked for heft, but his assured production underlines the increased dynamic awareness on display, reflecting their formidable live show in a manner they have never quite captured in the past.

This would count for nothing if the songs weren’t up to scratch, but rest assured there are gems here. The Bloom and the Blight is punchy, visceral stuff. Where the band formerly spun their meditations on religion and the Old West into 10-minute odysseys, none of the songs here breach the five-minute mark.

Sunday Souvenirs and Broken Eyes showcase Stephens’ gift for easy, generous melodies, the latter a gorgeous campfire sing-along. Ride Away and My Love Won’t Wait are all bluster and pomp; classic rock delivered via throaty howls and remarkable drumming.

If there is a minor shortcoming on this fourth LP, it’s that Stephens relies on the same dusty subject matter that has long-pervaded the band’s songs. Damned protagonists, archaic language and Biblical imagery abound, but it is all pulled off with such steely resolve and gusto that with the volume turned up it ceases to matter a great deal.

While two-piece contemporaries such as The Black Keys have gone on to larger venues and mainstream success, Two Gallants have carved out a distinctive, powerful identity all their own. The Bloom and the Blight builds on the band’s strengths and successfully maintains their idiosyncrasies, offering persuasive evidence that they are more than ready to step up a level themselves. 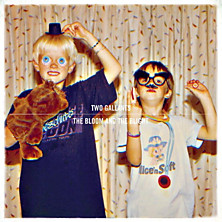