Children’s songs old and new, presented with a lustre and sleepy delightfulness.

Of course Oregon's Laura Veirs is not the first artist to record a children's record – arguably 1999's Lead Belly Sings for Children (and amalgamation of his Negro Folk Songs for Young People from 1960 and Play Parties in Song and Dance from 1941) paved the way, but it's not so very long since the Songs for the Young at Heart compilation which saw contributions from Jarvis Cocker, Cerys Matthews and Stuart Staples amongst many, as well as Mick Cooke of Belle & Sebastian's Colours Are Brighter, and Saint Etienne's Up the Wooden Hills EP. But Veirs' offering has a lustre and sleepy delightfulness that owes much to her lilting charm of her voice and her ear for a sublime melody.

Tumble Bee began with the birth of Veirs' son, and became a project with her long-time collaborator, the producer Tucker Martine. Veirs had grown increasingly interested in the history of American children's music, and together she and Martine trawled archived collections of lullabies, clapping songs, skipping songs and playground chants, some long-forgotten, some set down in Harry Smith's Anthology of American Folk Music.

The result is a merry collection of covers and re-compositions, from the ballads of Jimmie Rodgers, Woody Guthrie and Peggy Seeger to work songs, field songs and schoolyard ditties of the last century. Along the way come contributions from Colin Meloy (The Decemberists) and Jim James (My Morning Jacket) as well as Bela Fleck and Bob Dylan's drummer Brian Blade.

As anyone familiar with the work of Veirs and Martine might expect, one of the most striking qualities of Tumble Bee is its musical richness – Veirs' strong, sweet voice swollen with brass and banjo for the album's opener, buoyed by dusty piano and distant fiddle elsewhere, and riding brightly alongside the punchily percussive title-track. But it's never distractingly busy; at other times that voice is allowed to stand near-naked as banjo, strings, and sleigh bells build slowly behind her.

Thematically, Veirs draws on all the light and shade, sadness and shadows of traditional nursery rhymes and fairy tales. And so we find vigilantes and mountain shacks, bales of cotton, bivouacs and Kingston town, as well as a whole fluttering, fidgeting menagerie – foxes, birds, elephants, frogs and mice, cows and geese. It's a subject matter that seems to suit Veirs' tone; her voice perhaps never sounded so sad and lovely as it does when carried along on the clip-clop of some hushed lullaby: "When you wake you will have cake / And all the pretty little horses." 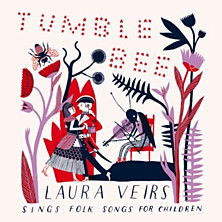