This is a peaceful album, but it contains very little peace.

The voices in Will Oldham's head that speak to us via his Bonnie 'Prince' Billy incarnation are not peaceful ones. This is an album of universal questions, asked on a personal level. What role does traditional love hold in the modern world? How does one reconcile the undeniable evil in us all? Heavy stuff - but all these questions relate to Oldham alone. The outsider looking in.

It's a long decade since, as a post-rock contemporary of fellow Louisville legends Slint, Oldham( along with sibling Paul as Palace/Palace Brothers/Palace Sound) started searching for a new American music. With an exponentially decreasing brouhaha, successive releases have shorn slick production values until he reached the zen-like clarity of Bonnie 'Prince' Billy. Last album, Ease Down The Road was a far jauntier trip, but this time it's all ambient foot-tapping, sighing electronica and hushed harmonies. This is hardly suprising as Master And Everyone was produced by Lambchop's Mark Nevers, whose Is a Woman had the same whispered vibe.

This gorgeous album however replaces Kurt Wagner's pantheistic joy in small things with a more carnal slant on life's mysteries. ''Let your unloved parts be loved'' he mutters in the opener, ''The Way''. Previous reviews of Bonnie 'Prince' Billy seem to have downplayed his influence on master magpie, Beck, yet it's this track that proves the fact irrefutably.

Like Beck he's not frightened of mixing bluegrass religiosity, slacker nonchalance or even English folk rock. Duetting with Nashville professional Marty Slayton on several tracks, they summon the ghost of Sandy Denny. The title track even resembles a stripped down reel. Yet it's the ambivalent lyrics that draw you in - balancing tender love songs (''Ain't You Wealthy, Ain't You Wise?'') with explorations of biblical evil, only to deflate the whole enterprise with a song like ''Maundering'' (it means talking drivel - look it up). It tells you straight that he's just a very flawed man, on the lookout for redemption - and with a tendency to ramble. In the end it's all about infidelity and indifference.

Even a song called ''Joy And Jubilee'' hardly convinces you that this is a happy world to visit. As American gothic goes, this is far more compelling and convincing than, say, Nick Cave's cartoon baptisms of fire.

Finally, the key track seems to be ''Wolf Among Wolves'', with its plea to let Oldham/Billy be loved for what he really is. The biggest question seems to be; if we are evil, why can't we accept it? This is a peaceful album, but it contains very little peace. 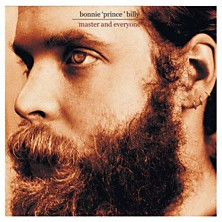