Hyped by The Face magazine in 1982 as, ''the most fashionable label in the world'', New York based ZE Records was founded by French art student Michel Esteban and British journalist Michael Zilkha in 1979. Their eclectic roster focussed largely on frazzled, leftfield post-punk/disco hybrids, and being so cutting edge it hurt. This hugely entertaining compilation charts their peak years, which more or less ended in the mid 1980s.

If for no other reason, the label deserves a place in the music history books for signing the legendary, twisted synth duo Suicide for their second album and then releasing the first solo work by their singer Alan Vega. Their two cuts alone are worth getting this for, especially Suicide's astonishing Dream Baby Dream. Over a backdrop of Martin Rev's metronomic but startlingly organic beats, and uplifting analogue syn-drones, Vega croons through six minutes of faux-Elvis sweet nothings. When Suicide's records still failed to sell, he switched to electronic rockabilly, represented here by the pulsing thrills of Jukebox Babe. Pop genius at its finest.

The other most interesting figure involved with Ze Records was August Darnell, a.k.a. Kid Creole. He's behind the scenes on the early house dabblings of Deputy Of Love by Don Armando's Second Avenue Rhumba Band and also Garcons' French Boys, which draws pretty brazenly on Chic's debut smash Dance, Dance, Dance, from a couple of years earlier. But it's when Darnell takes centre stage on the Something Wrong In Paradise that he really impresses, with a sharply observed lyric about corrupt Caribbean leaders set to sunny, pan-tropical rhythms.

Other highlights include Casino Music's punky, grunted take on the Sonny & Cher hit The Beat Goes On, the monster groove of Material's Bustin' Out, featuring a compelling, no-nonsense vocal by former Labelle singer Nona Hendrix, and Marie Et Les Garcon's unclassifiable oddity Re Bop Electronic, which apparently launched the label.

So, if you're unmoved by the likes of Was (Not Was), or underwhelmed by Glasgow-based group Michael Dracula's attempt to rekindle former glories after Esteban relaunched the label in 2003, there are plenty of compensations. 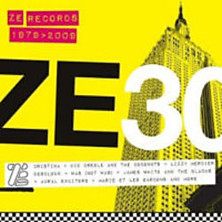