Timberlake’s third solo album is all mood and no tension, exclusively foreplay fare.

With his first new music in seven years, Justin Timberlake acts a suave frontman to a Whispers-inspired ensemble. When he asks, Jay-Z gets up from his seat. Timberlake prides himself on his ability to command an audience, and to damning expectations.

With his 2002 solo debut Justified, he broke away from 'N Sync and into mainstream RnB circles; on its follow-up, 2006’s FutureSex/LoveSounds, he channelled Prince as he "brought sexy back".

Third album The 20/20 Experience dazzles, but it also fails to take hold because Timberlake approached it like a big-budget film: a slew of special effects, but little else.

To its credit, 20/20 does provide an escape from our own, Harlem Shake-soundtracked reality. Lead producer Timbaland cues horns and clinking glasses to illustrate truffle-season opulence.

When Timberlake breaks from this glittering charmed life, he runs to 20/20's most exhilarating moments. Don't Hold the Wall is a dank, Bollywood-inspired corridor, while Tunnel Vision finds attempt to fixate on The One turning into a dizzy spell. He sustains his notes as if he's trying to steady his breath, but he keeps losing control.

Most songs are seven to eight minutes long, presumably because our hero falls in love and then indulges in lust. However, 20/20 often segues these prolonged outros, inspiring Timberlake to drive already extended metaphors to the ground.

When the sparkling Strawberry Bubblegum recedes into a 60s-style, keyboard-driven throwback, Timberlake adds that he's her blueberry lollipop. In Spaceship Coupe, after his voice has already creaked into falsetto come-hithers and the song has climaxed at an electric guitar solo, Timbaland launches female moans like wind-up toys.

With his return to music, Timberlake wanted to stir up anticipation with the feel of a major Hollywood release. Unfortunately, most of 20/20 falls into a rut; it sets the mood, but then fails to create tension.

When Timberlake released Mirrors, critics interpreted its eight-minute length as a sign of ambition. But in full context, 20/20's penultimate track reveals itself to be one of this album's simplest. It works, because it hinges on a stunning realisation: “I don't want to lose you now.” By then, it's too late. 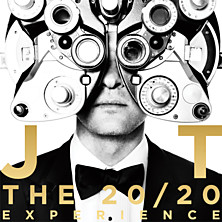