Nicki Minaj could be accused of many things, but never stinginess. The Re-Up is a bumper 3-disc set featuring this year's Pink Friday: Roman Reloaded album, a DVD of promo videos and an EP of new tracks. It’s a classy alternative to the usual "deluxe" reissue, delivering new material between albums.

The Re-Up also seems to have an ulterior motive. The original Pink Friday: Roman Reloaded was an exuberant mess of an album: it began with some brilliant rapping, turned Eurodance in the middle, then wound down with a series of gloopy pop ballads.

The new EP redresses the balance by adding seven new songs that showcase Minaj's flow – as opposed to her Auto-Tuned singing style. Her poppy recent single Va Va Voom is tacked on the end, but it feels like a Trojan horse to sell the more hip hop-flavoured new material.

Hopefully this works, because there's good music here. Tracks like Freedom, I'm Legit and The Boys give Minaj fresh, inventive productions to boast over; the latter is especially exciting, a mix of dancehall, folk and machine gun beats. Elsewhere, Hell Yeah is built on a fab Michael Jackson-style bassline, while Up In Flames is probably her grandest moment yet.

On most of these tracks, Minaj rises to the occasion. As her public persona becomes more cartoony, it's easy to forget what a talented rapper she is. The EP features her usual mix of crowing, cussing and dissing, but in the process, she slips in lots of clever pop culture references – everything from Twitpics to 1990s sitcom Blossom.

There's also some great wordplay: on Freedom, she rhymes "ya approval" with "ramen noodles", and pulls it off.

Admittedly, there's a lot here to digest. On the one hand, adding the new EP makes the existing album feel even more bloated and schizophrenic. But on the other, this is the era of iTunes and Spotify, and listeners can sculpt these 27 songs into whatever they want.

One suggestion: add the first six tracks from the original LP to five or six from the EP. The result is a tight, traditional-length rap album, something Minaj will probably never make. 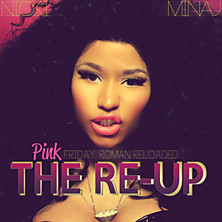