A special third album from perhaps the most inspiring, intriguing band in Britain.

Wild Beasts’ rise from cult concerns loved by a critical clique, through Mercury Prize-nominated sorts with a sharp and saucy twist on typical indie tropes, to this third album of quiet, measured majesty represents a victory for individuality over intermittent trend-hopping. The Kendal-formed four-piece have only ever done things their way – and while early singles for Leeds-based indie Bad Sneakers lacked the production polish of later recordings, they possessed a singular potential. The band now ranks as this nation’s most wonderfully esoteric, absorbingly unique act. They are a vivid example of Britain’s ever-evolving, always riveting relationship with pop, able to court commercial audiences while maintaining an important air of confidence, of conviction with their craft, which drives these songs into the heart and soul of the listener.

Smother was created in relative isolation, in Wales, and it sounds like it: on Deeper, Tom Fleming sings that "all else falls away", and while in the company of this record it’s entirely likely that the outside world will, indeed, fade into insignificance. It’s that sort of special collection, one that manifests an entirely believable, almost tangible soundworld which one can’t help but inhabit alongside its creators. And it’s only a few steps forward before the first rabbit hole blocks the path, into which a stumble is inevitable. Hayden Thorpe introduces Lion’s Share atop a synthesised throb; but it’s when the plaintive piano begins that the piece commences its hypnotic charm, and one becomes deeply enveloped. "What are you running from?" asks Fleming, here taking the lyrical spotlight more frequently than on the past two albums. Truth is that we’re not running from anything at all. Rather, we’re racing towards the band, eager to discover what’s around the next compositional turn.

Lion’s Share is gorgeous, no question about it. A simple, seductive song that opens an album which, largely, continues in a similar vein: here lies mystery, romance, tall tales told by men who surely wouldn’t just make this stuff up. It’s there in their eyes, the reality of the experience and the sincerity of their stories. Again, Thorpe’s thematically entrenched in a loved-one’s undergarments on more than one occasion: Bed of Nails is one such number, albeit with lines like "surround me like a warm bath" conveying a more emotional connection than the borderline smut of their last LP, Two Dancers. Plaything is a little more teasing, rather more distant with its affections – although it discusses uncertainty with what its protagonist’s paramour is thinking, suggesting tentativeness where once there was thrust and swagger. Invisible is wholly different – Fleming, flanked by understated instrumentation, seems lost in melancholy, offering farewells to "things I thought I’d want"; its final line, a literal kiss-off, is devastatingly exquisite. The song is another tender, almost unsettlingly touching moment on a collection replete with them.

Anyone who has seen the video to lead single Albatross will have an idea of what to expect here: an uncommon beauty, distilled through disquiet, presented at what appears to be high-definition half-speed. This is a world away from the boisterousness of the band’s debut, Limbo, Panto – a world of self-discovery, unexpected achievements and focused development. If this doesn’t secure Wild Beasts another Mercury Prize nomination, it’d be a travesty for British pop. They are, right now, the most inspirational, intriguing, effortlessly enrapturing band at work on these shores. And Smother might well prove to be the album of 2011. 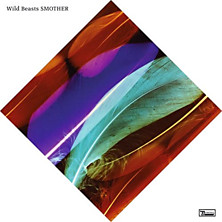