The Brummie new romantics return again with a great album...

Back in the 1980s, a less airbrushed Duran Duran goofed through a promotional clip for MTV Italy in which they asserted, “We’re not Wild Boys: we’re mild boys with the Mad Max factor”, and to their credit, the guys never pretended to more than dressing up as tough guys in tons of slap. This unconscious homage to The New York Dolls - the real drag queens of rock’n’roll – sees its latest expression in the title track to their most recent album, released with as much zip-a-dee-doo-dah at a series of gigs in a traditional Broadway theatre.

In places Red Carpet Massacre rocks like a mean motor-scooter, but otherwise it owes little else to Manhattan’s princesses of the trash aesthetic: instead, the album sees the boys stride back into the studio after a three year break, confident and ready to resume their unique mixture of passionate, life-enhancing, organic synth-pop and heartfelt guitar melodies. The undeniable maturity and subtly knowing references that speckle LeBon’s recent lyrics demonstrate how well he’s stayed in touch with modern cyber-fears while never denying the fleshy joys of a synthesised music that has made the band rich, famous and popular for almost three decades. Duran Duran’s songs here are as always flavoured bittersweet with regret and an occasional manly tear - no matter how much technology they hide behind, there’s never any doubt that Duran Duran are composed of flesh and blood.

Credit is due to the stellar production team – Timberlake, Timbaland and Hills – for not stomping all over the essential European fragility that characterises the band; Simon LeBon’s voice is illuminated by the odd noticeable studio effect, rather than drowned by it, and there’s been hardly any attempt to retro-fit any kind of funky sensibility or modify Duran Duran’s instantly recognised blend of vulnerability and defiance. Ill-advised bursts of white-boy rapping aside (step forward the guilty Justin Timberlake), it all forms a shining, crystal pure perfection of production, skilled performance and delivery, with the stunning single "Falling Down" riding high mid-album like the brightest diamond in a tiara. 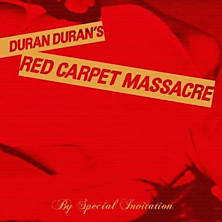