A contented celebration of success with weed as the toast of choice.

Curren$y’s last major-label studio record, 2011’s Weekend at Burnie’s, largely epitomised his style: lazy, laid-back, cool as you like. But although it was just as much the soundtrack of choice for long nights of smoking, it was also stripped-down and frequently darker than this latest set, The Stoned Immaculate.

This eighth studio album is hardly poptastically jubilant, but struggles and disappointments are a thing of the past. It’s a contented celebration of success with weed as the indisputable toasting substance of choice. The sound is bigger, with more detail, exhibiting more confidence to experiment.

There are huge basslines, cinematic strings, and seesawing space-synths. Everything is complemented by polished production and well-chosen guests like Wiz Khalifa, Pharrell, Estelle and Big K.R.I.T. – though Curren$y’s silky, languorous presence remains the rightful centrepiece.

Drifting over to the mic that king-of-fickle Wale has been hogging, he announces on opener, What It Look Like: “I’m clearly in a different tax bracket now, dog.” And he doesn’t intend to let us forget it for a second. The songs are largely a run-through of what he and his entourage are now able to acquire, and the money and tail-obsessed lyrics may pall for those averse to rampant materialism.

“I like nice s*** and I know how to get it,” he shrugs on Showroom, and isn’t afraid to admit on Chasin’ Papers that, “We livin’ for the money… we dyin’a have it”. He even goes as far to proclaim that his music is a means to an end rather than a creative necessity on Armoire: “This rap s*** just my hustle baby, we paper chasin’.”

But weed is the great leveller: “Out here there’s no stars / Out here we all stoned,” he assures on Chandelier. When life is a constant blaze, the important thing is that the smudged edges of reality don’t begin to sharpen before the next joint’s rolled, that nothing is a struggle. As long as the smoke party keeps going, who cares about anything else? 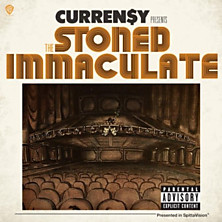