The band’s scruffy-hearted charm still lies just below the surface.

It’s been three years since Frightened Rabbit released their last record, The Midnight Organ Fight, a startling, brittle and quite brilliant break-up record that bared the rather bruised soul of the band’s principal boy Scott Hutchison. It was at times a painful, funny, heart-lurching record that, as it drew to a close, seemed to promise sweeter times to come.

In its successor, The Winter of Mixed Drinks, we find Hutchison has been true to his word. From the off the record strikes a brighter beat – its opener, Things, telling of abrupt new starts, abandoning worldly possessions and fleeing for the hills: “I left them on the floor,” he explains as the music surges, “and ran for dear life through the door.”

Things is followed by first single, the gloriously anthemic Swim Until You Can’t See Land; a song that seems buoyed not so much by optimism as a dogged desire not to drown: “Are you a man?” he gulps. “Are you bag of sand?”

It’s these brasher, brighter songs, along with second single Nothing Like You and the folky strains of Living in Colour, that strike you first; they’re rich radio-pop, still happily a little coarse and mumbling, but undeniably hummable. With a little time, though, the more intricate tracks creep up on you – the whirling centrepiece of Skip the Youth, say, or the fine-drawn lyrics of Not Miserable.

When Hutchison first spoke about the new material, around the time recording began, he told of how, “The theme is going to be about pushing yourself to the edge of things and being alone… It’s not all fun and games, but hopefully it’ll just be less obviously personal and brutal than the last record.” Certainly, The Winter of Mixed Drinks paints us a considerably less stark landscape, though – and this is really a minor point – gone too is some of the Frightened Rabbit roughness and vulgarity.

At times, this album could be interpreted as a grasp for a bigger audience; the Scots have been ploughing this furrow for seven years, and finally now seem poised on the brink of something grand. Accordingly, The Winter of Mixed Drinks is more polished, more polite than the band’s earlier offerings, but it’s reassuring to note that the band’s scruffy-hearted charm still lies just below the surface. 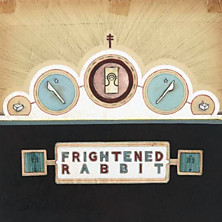